Play on the Point of Symmetry

In a symmetrical position, there is a play on the point of symmetry.

Many symmetrical positions have asymmetrical solutions, so this proverb should only be taken as a suggestion for where to look. A straightforward translation of the proverb:

The symmetry in these positions is functional symmetry rather than strict mirror image symmetry. This is shown in the second example below.

The proverb relates in many ways to the idea of miai. If the two sides are identical, a play on one side and its mirror image on the other can usually be considered miai. After playing in the middle, you might then be able to make an eye on either side, or connect on either side, or make territory on either side ... whatever the goal is in that situation.

Of course, this proverb can be misleading. There are the exceptions mentioned below, but also, sometimes the miai inherent in a position of symmetry means that no move is even necessary. It would be more accurate to say that in a symmetric position, if any move is necessary, it's probably in the middle.

For really simple applications of this proverb, consider all of the killable eye shapes that have three points or larger. 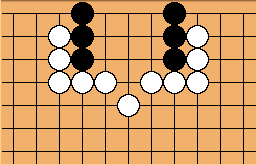 In the example, Black can keep the group alive in seki by playing on the point of symmetry as shown in the following diagram. 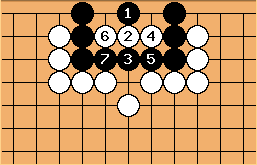 Of course, sometimes (as in this example) there is more than one point of symmetry - but the proverb will at least reduce your options. 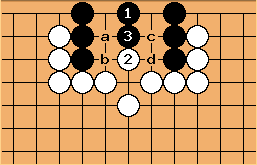 A possible variation is White playing at

. Then in this case, Black can apply the same proverb again, by playing at

. Then a and b are miai, and c and d are also miai, so Black lives with two eyes. 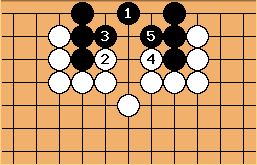 In this way, Black is still alive. 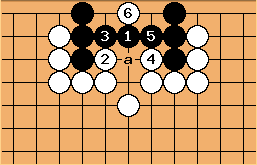 However, if Black plays at the wrong point of symmetry at

or a, then White 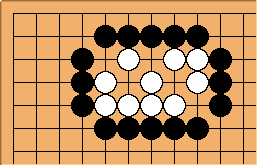 This is Beginner Exercise 46, flipped.

Sometimes, it also applies to the opening: 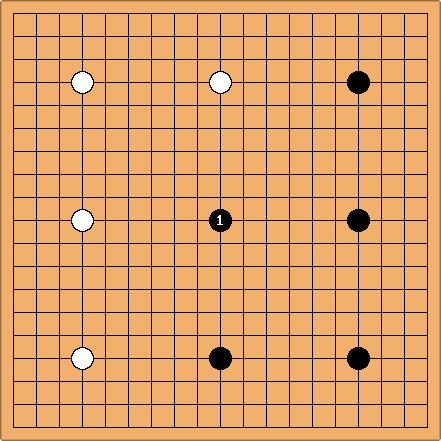