In my opinion, this might be an improved version of mirror go. It works like this, say whenever it's feasible, you reply with something similar to a mirror move, and you play normally only when it's not reasonable to do so. I assume you'd want to play manego against a stronger opponent, right? So, hmm, I dunno how to describe this diagramwise... I need an example game or something... 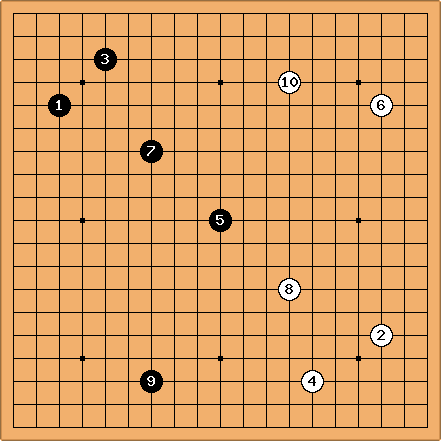 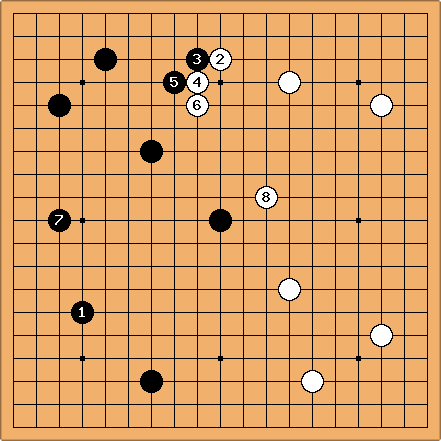 Hmmm... not so good... in fact, my outline here has white suffering? Anyhow, I'm trying to say that 8 is an improved mirror for 7, because of the tengen, sometimes give up mirroring for tenuki... I dunno, someone stronger than me polish up this idea for me?

Confused: I think the concept of partial mirror isn't very well defined. It sounds a lot like partially pregnant. As to what you're describing, it's the mixture of two concepts:

One is mirror go. The only possible improvement to this strategy is to stop doing it. This could happen at any move, if the mirroring player thinks there's more benefit in playing somewhere else.

The other is general question between building your own framework or keeping your opponent from doing so. Best is to achieve both objectives at the same time.

Your examples look as if both players decided, they get better benefits by ignoring each other and building in their own corners with a similar strategy.

Charles One of the old introductory books on Go calls this jidori go - territory-taking Go. This is frowned on as a way to play for learners (for good reason). When strong pros play this way, eventually some very sharp fighting will break out as the opposing frameworks are invaded. Top players won't simply divide the board between them: their positional judgement is too accurate to play positions in such a way that one side loses on territory without putting up a fight. But most kyu players, anyway, aren't up to the required combination of sharp play and counting to play well in this type of large-scale position.