This page collects various reports, notes and discussions about play on larger boards than 19×19.

Any more large board references from the literature, experiences or ruminations? Add them here, in the appropriate section! :-)

David: In my opinion, the question we need to answer is: is it always true that when the board size becomes larger, there would be some new techniques or properties that emerge, or when a certain size is reached, no more new properties will occur? I have a feeling that the importance of influence and moyo has not been fully unveiled on a 19×19 board. I feel that 25×25 would be better, although I cannot show you any sound evidence. Anyone have any ideas?

Fando: Id like to speculate that the 19×19 board was not arrived at accidentally. If 21×21 is really difficult to play (test this on KGS), it makes sense to me that the great players of the legendary past would settle on 19×19 as the next best thing.

David: One theory of determining the board size of Go is: assume the third line is for side and corner territory, while the fourth line is for the middle, then on a 19×19 board, we need 56 stones on the third line to surround 136 points, and 48 stones on the fourth line to surround 121 points. Their efficiencies are similar (136/56 is more or less equal to 121/48 = 2.5). However, I think this theory is wrong. No one will play a game in this way (one of them only takes side and corner, and the other only takes the middle). Also it is hard to prove that Go is merely aiming at making a balance between territory and influence.

Patrick Traill: I agree, the argument sounds retrofitted to a size that arose for other reasons. 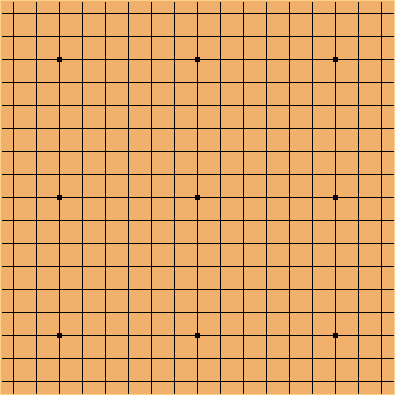 19×19 arises naturally when players began to play on the implied points around the edges of the old style 17×17 boards. Go boards and stones were often used in fortune telling. The connection between 361 intersections and 365 days is important.

A 21×21 board has 441 positions, 80 more than a 19×19 board. This makes the larger goban roughly 22% larger. The influence of the corners is reduced somewhat and the center of the board is much larger overall. This clearly has an impact on fuseki and prolongs the middlegame as there is more room for groups to live. Yose shouldnt be too different, but theres more to keep in mind at the end.

In The Theory and Practice of GO, Korschelt describes an experimental 21×21 goban that he constructed and turned over to his Master, Murase Shuho, for testing. He describes a sample game that was played out to about 130 moves before ending. Only the first 57 were shown. 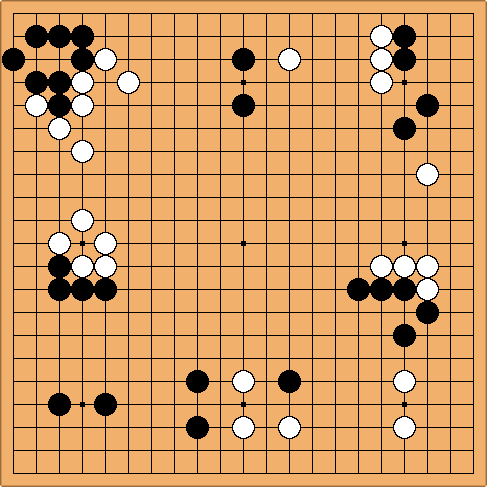 Korschelt remarked that the game "took on a freer and more deeply involved character, but ... at the same time the difficulty of keeping command of the game grew at an extraordinary rate." He goes on to note that on a 19×19 board, "too many unexpected situations turn up for beginners," and speculates that if the board were to increase to 23×23, "not even the best players could any longer maintain a comprehensive view of the countless possible combinations."

Honinbo Shuei and Shusai studied the 21x21 board for some time. Shusai observed that 4-4 and 4-5 points were more effective than in 19x19 board. There was even a newspaper sponsored professional game between Miyasaka Shinji and Tsuchiya Shugen.

Cazort: Ive played a few 21×21 games on KGS--and Id be up for a few more if anyone likes. I think the most notable difference is that the different parts of the board seem to be less in "sync" during the opening. Often, in the opening on the 19×19, when something happens in one corner, there are strong implications for the sides and neighboring corners. On 21×21, there is often a lot more space for groups to live on the sides after the corners have been played in. When you go back to playing on the 19×19, it seems very "tight" and everything seems neatly connected. Perhaps mid-strength players should practice on the 21×21 as a useful exercise to increase whole-board thinking and appreciate the way everything is really tightly connected on the 19×19.

AnonLinguist: Ive played games at 37×37, and the difference with 19×19 is huge. One corner does not directly affect another at all, except for ladders coming directly from the opposite one. Playing in the middle of a side, exactly between two corners affects neither. Thickness in one corner only projects so far, definitely not to the other corner along that side, not even halfway.

In the middle, the groups have no direct relation to the sides or corners, and it feels a bit like borderless go there. Its like switching from the bathtub to a very wide lake. Where at first you could touch the sides in every direction, you now cant see the shores.

Its very disconcerting and confusing, even after gaining a fair bit of experience with it. It definitely makes one appreciate the interrelation of the much more manageable 19×19 board. Not to mention that on 37×37, with about 900-1100 moves per game, one hour per side is a VERY fast pace of blitzing. Four seconds per move is rather harsh.

That said, its a fun variation to break with the usual style of go now and then, but if you dont want to blitz it, take a day off for a good game of 37×37. 20 seconds per move (18000 seconds per side, five hours) is a lot more relaxed.

Platinum Dragon: What most players still do not see is that the 37×37 board has a 6th line as territory line.

(unattributed): Hey Platinum, The way I see it is this: while the "territory line" by your definition increases as the board gets larger, what does not change regardless of board size is the difficulty of keeping any territory above the 4th line and not having it scooped out from under you/invaded. Thus, as boards become bigger, making territory requires more effort than making influence of comparable worth, logically creating a strategy that is highly slanted towards influence styles. This is why 19*19 is seen as the perfect balance.

Tas: It doesnt seem like it will ever get finished.

Patrick Traill: Why the even number? Did you use four standard boards or just double 19 anyway?

Flower: This page (PJT: The obsolete (38×38) rather than the current (Large Boards) page.) is somewhat devoid of objective information and would rather fit into a entry of a blog :) But this page is rather new, mayhap the author will add more information later. And I see that you linked from Fuseki which is a bit irrelevant too. Especially as you offer no Fuseki patterns for 38×38.

An even board size? Doesnt that have a problem with imbalanced manego (mirror go)?~srn347

Fando: My roommate told me of a game played on a 93×93 board between two pretty good players (maybe 10kyu). The game lasted 8 hours and ended in a disastrous loss for one of the players. Apparently, neither player could grasp the whole board situation and ended up doing nothing but fighting tons of local skirmishes. Towards the end, the middle of the board became a chaotic morass of craziness. (Anecdote corrected on new info.)

Platinum Dragon: Sorry for interjecting into the middle of other peoples speech, but I want to say that a 93×93 board has the 14th line as the territory line. Read my post in "Why 19×19" for more information.

Charles Matthews: I would not characterize players of 10Kyu as pretty good, closer to extremely weak. Our local clubs and tournaments discourage players of less than 10kyu from playing on 19×19 boards.

(Rest of the discussion moved to Who Should Play On Which Boardsize.)

Anon: Platinum Dragon has repeatedly brought up the fact that the territory line may be higher for larger boards. I understand how they have defined it. Im wondering whats the significance of knowing that the territory line is on the 6th line on a 37x37 board for example. Surely it is still difficult to create actual side territory if youre still above the third line. The argument that influence from playing on the 4th line and above is more important than territory on boards larger than 19x19 is fair, but how would one make any use out of the knowledge of where the line of division of roughly equal points between side territory and centre territory is? Is Platinum Dragon proposing that players should focus on placing their stones on the 6th line on a 37x37 board?

KillerWasp?: The position of the line will always be the same in all sizes of the board, since it is the most suitable distance with respect to the edge and the corners. It only distances between corners and changes the size of the center, which is made more difficult by the lack of support from the edges and corners.