A false eye is something which looks like an eye, but shouldn't be counted as part of the group's eye space because some of the surrounding stones can be put into atari. 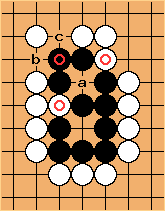 The black group has a real eye and a false eye. The false eye is the one at a. Notice that the marked black stones have an incomplete connection with the rest of the group: the marked white stones form the eye-stealing tesuji. If White fills up the exterior liberties at b and c, the three black stones are in atari. If Black connects at a, the "eye" disappears. Just the same if Black allows their capture.

Thus, a false eye is not an eye in the strict sense.

There are four basic types of false eyes (see also recognizing an eye) :

False eyes are fundamentally bad shape, and they can be taken advantage of in order to reduce eyespace or cause shortages of liberties to help with captures. 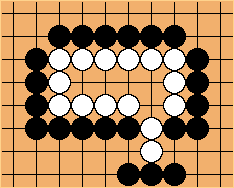 This White group may seem alive at first glance, because it seems to have more eyespace than a straight four group, but it actually has less and is unsettled, because Black to play can make a false eye. 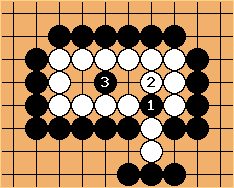 captures, the result is a false eye at 1. Then

plays in the center of the remaining 3 point eye to hold White to one eye. 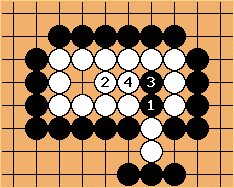 extends into the White eye. As a result, if

can throw in to make a false eye and kill the White group. 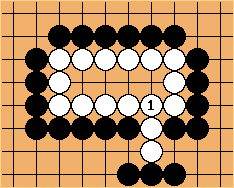 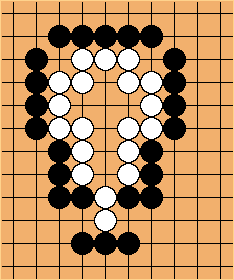 Also, forcing the opponent to create false eyes is a very common technique to reduce the number of liberties of a group. Squeeze tesujis and capturing problems very often involve false-eyes. 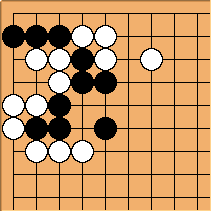 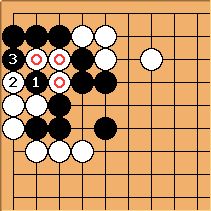 , the marked stones are captured. 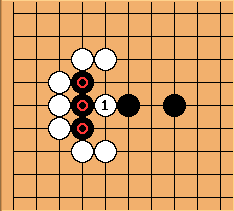