In the course of discussions there were a number of pages created, relating to the description of the liberty concept.

The sense of liberty used at liberty - introductory is what elsewhere is called primary liberty, physical liberty, what-you-see-is-what-you-get liberty, dame liberty or just dame. The objection to calling this just dame is that the word has another meaning, neutral point. Liberties in this sense are the liberties of a chain, rather than a group. They can always be counted as the number of empty points adjacent to a chain of stones.

A careful way of saying the other sense would be capture metric liberties of a group. So one has the slightly pedantic notion of capture metric liberty, which simply means a count of one play in a sequence to capture a group in a capturing race. It is however important that the surviving chains are specified, on each side of the capturing race. When groups are not single chains, sacrifice possibilities arise. 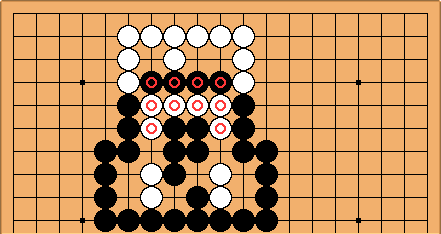 This example has been constructed to make the point without using shortage of liberties, a big eye or other approach move effects.

chain has two primary liberties. The

chain has three liberties, without complication. But Black hasn't yet won this capturing race. If you consider this position with White to play, White can win.

That's because White can gain a liberty by connecting to either of the two-stone chains.

It is tempting to use the secondary liberty concept. White's

chain has extra liberties, which are located on another chain.

The secondary liberty concept is unproblematic in some cases. Those seem to be the types of capturing race in which one has a mental 'map' of where they are. Then one can count liberties as primary+secondary, with the former located adjacent to the chain (assuming it is a chain, rather than a group); and the latter elsewhere and in definite places.