A half-eye is an unfinished eye: a potential eye that can be completed or destroyed depending on who plays first. Typically, the moves at a half-eye are locally small for both players, and are only played in order to make a group live or die, or to keep it on the run.

It is so called because two half-eyes are effectively a whole eye, as they are miai.

A three-quarter-eye  where forming one eye threatens to form a second  is sometimes also referred to as a half-eye; both are instances of fractional eyes, whose values need to combine to ``geq 2`` for a live group.

The marked point is a half-eye for Black ...

... White can remove the eye by playing first.

One and a half eyes is unsettled 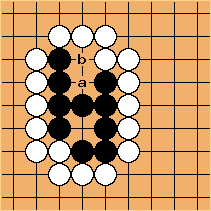 This unsettled black group has a half-eye at a.

The key point is of course b, because Black needs to play there to complete his second eye.

One eye and two half-eyes make a living group. 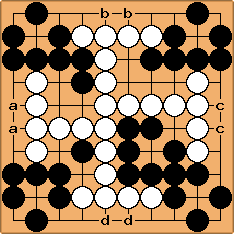 Half-eyes can be used to count up to two eyes.

Once one understands the idea of half-eyes, it is useful to be able to recognise them in common situations. In particular, this helps one solve some life and death problems.

(See Landman[2] for many examples of fractional eye shapes, including many corridors.)

Half eyes at the edge of the board

Assume in the following examples that Black connects through

to the rest of his group. All Whites stones are assumed alive.

To do: add more similar cases.

The methods of CGT may be used to treat a half-eye as a sort of combinatorial game with the result:

To do: make an article on eyespace values? explaining the main points of Landmans paper as a more theoretical counterpart to fractional eyes.

So the result of this game is

Jan de Wit: Another nice reference is Martin Muellers Ph.D. thesis Computer Go as a Sum of Local Games: An Application of Combinatorial Game Theory which can be found at

ftp://ftp.inf.ethz.ch/pub/publications/dissertations/th11006.ps.gz. This also has the most accessible introduction to Combinatorial Game Theory which Ive found so far.