This page is intended for people who are beginning to learn the game of Go and prefer a non mathematical and visual way to recognize an eye. While the technique discussed here works in most cases, it is not a foolproof way of determining whether the shape is a real eye or a false eye.

More formal discussions can be carried on formal definitions of eye.

What is an eye?

An eye is an empty space surrounded by stones of one colour, which cannot be occupied by the opponent, unless the surrounding stones themselves are captured in the process.

Groups with two eyes are alive, because you have to remove one before the other.

Not all alive groups have two real eyes: there are common exceptions like seki and extremely rare beasts like false eye life. Also, in many cases the alive groups have more than two eyes, or large spaces which are known to form eyes easily, known as eye spaces or territory.

We will show the reader how to distinguish a real eye from a false eye and develop an eye for an eye. This visual recognition works for the vast majority of groups who need to form eyes and belongs to the repertoire of any go player, who is well aware of exceptional cases.

There are two conditions for determining whether there is an eye.

1. The group must surround at least one empty point 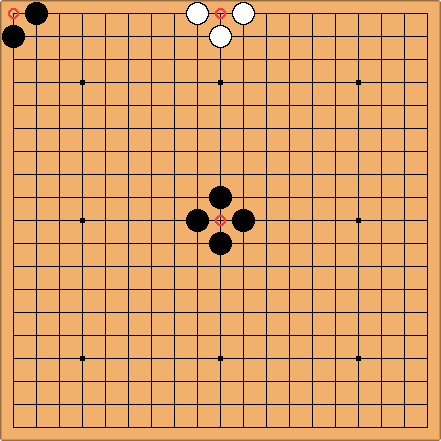 In each of these three cases, the group surrounds an empty point.

2. The group is or will become a chain 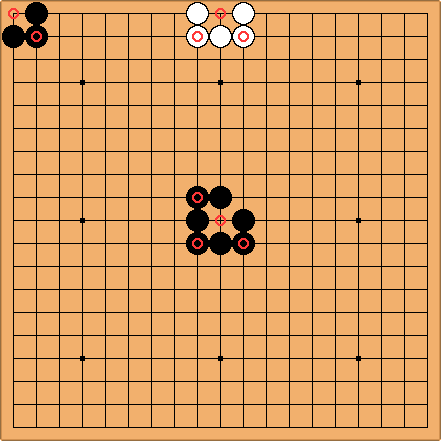 The marked stones turn the surrounding stones into a single chain, through solid connections. Now that both conditions are satisfied, we recognize a real eye.

False eyes are empty spots surrounded by stones that cannot form a solid chain. They look like eyes but aren't.

While the above gives a first visual clue to what is an eye, some stones can be removed or shifted while the eye still remains an eye.

3. Are all stones necessary? 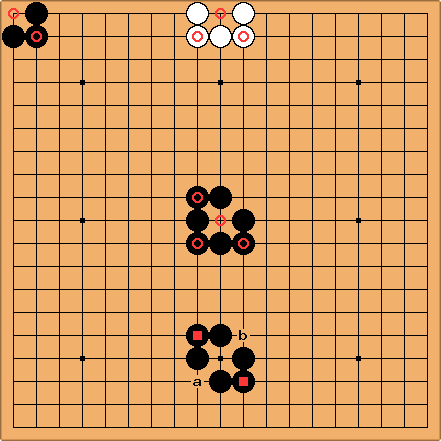 In the corner, the marked stone cannot be left out. If White can place a stone there, the eye is not real anymore.

Similarly, at the side, both marked stones must be present, or Black can make the eye a false one.

However, in the centre, not all 3 black stones are necessary. Each one of these three may be left out, if the other two remain in place. At the bottom, we've shown how the stone at a has been removed. Black can still turn his surrounding stones in a single chain, by either playing at a or b. In general, White will not get two moves in a row, not if the situation is important.

If we would remove one more stone, then it is no longer guaranteed for Black to make a single chain: if White goes first, she can occupy 2 of the 4 corners.

This rule of thumb in the centre may be abbreviated as "the 2/4 rule".

4. Are all stones necessary at that spot? 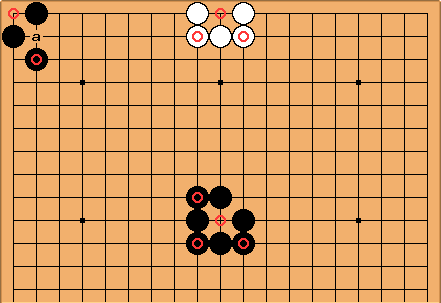 The important thing is that the opponent cannot obstruct the chain. In the corner we have moved the marked black stone. If White now plays at a, she will be captured. The eye is still an eye.

Though the concept is well explained at two eyes we repeat why the eyes must be solidly surrounded, or capable thereof, and why we need two of them.

5. Why a solid chain 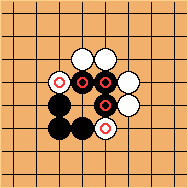 Here we see a false eye, an empty spot surrounded by stones which are not solidly connected. White has been able to put two stones on the corners, thus splitting the black stones into two chains, marked and unmarked. The marked one can next be captured. 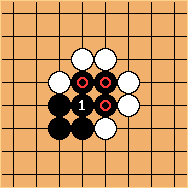 Black can only save these stones by filling the eye, which thus is no longer an eye. 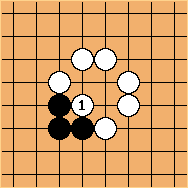 On the other hand, if we allow

to capture the three black stones, then obviously there is no eye for black here. 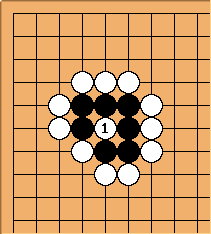 Even a single real eye can still be captured. In this diagram White has removed all liberties of the solid black chain, except the eye. According to the rules of go, it is now allowed for White to play

and capture all the black stones. 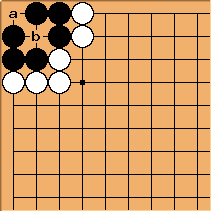 This an example of a group that lives with two eyes: two empty points, surrounded by solid chains, or such that White cannot break the connection nor occupy the points. Indeed, a white move at a would split both chains, but this move is not allowed because both chains have still a liberty at b. But White cannot play b either, since she first needs to play a to remove all liberties of the chains that surround b.