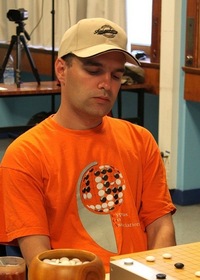 Dinerchtein became a professional shodan with the Hankuk Ki-won in 2002, 3-dan in 2008.

Alexandre had a major

Alexandre offers one-to-one and group lessons via Skype on KGS and DGS, simultaneous games and live commentaries for tournament organizers.

In January 2010, he started the Korean-style Insei League on KGS. It started in with 5 divisions. Later this was extended with a league on DGS

Recently, he created much more on the internet.

In the same time he had worked also on baduk.pro - his alternative as a social site (but only for the go community) to Facebook, which was launched in March 2010. Soon, it gained several 100s of members.

His name (Александр Динерштейн) is also transliterated as Alexandr Dinerstein or Alexander Dinershteyn, but "Alexandre Dinerchtein" is the form he seems to use himself.

Charles That's a Cyrillic romanisation based on French pronunciation - there are very traditional reasons for it.

His KGS nickname is breakfast , kitra (9d) on Tygem