Throw-in moves are a common technique both to create kos - which is explained here - or to capture a ko first. 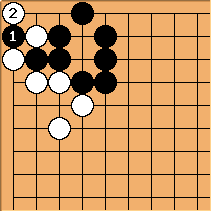 In the endgame Black can throw in at

, and White must take with 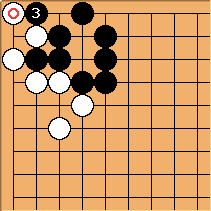 and White is in no position to connect. White has to start the ko by capturing

. It is however hard for White to resist: large threats are required. 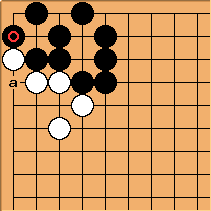 Black has a follow-up at a which is substantial, once Black has captured to win the ko (marked stone). If White just connects at a Black has of course taken profit in sente here (and then can return to answer White's threat). 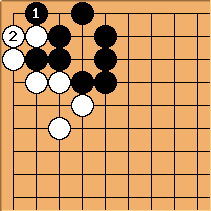 here makes this area all neutral points, which is much inferior for Black.

Black makes a throw-in at

This position is like a ten thousand year ko because whoever makes the ko, the opponent takes it first, and one player can make seki.

Black can change his mind about the seki and make a ko by sacrificing three stones. See Sending Three Returning One.