The 4-4 Point Traditional Slide Joseki refers to one of the earliest joseki that beginners learn. It is considered an even result that favors neither player. Black ends the joseki with sente.

Both Black and White have a strong position, and it is not urgent to play any more moves in the local area. Continuations may arise in the middlegame or endgame. One-space approaches from the outside can activate aji inside either player's base. Although these approaches are not strictly sente, interesting variations can arise if the approach stone is present. Alternatively, either player may play moves to gain influence.

Endgame is available for both players by pushing at the 3-2 point, which is double sente.

Moves are listed by frequency in professional games [1], which is sensitive to whole-board position. Bolded moves are commonly considered joseki. 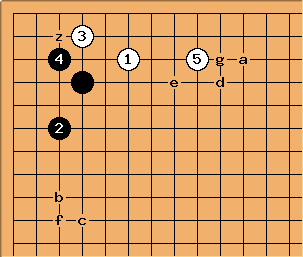 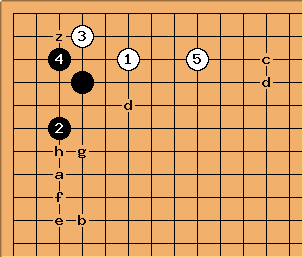 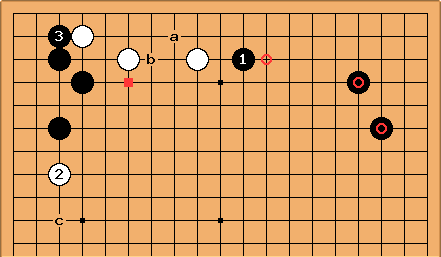 The most common middlegame continuation for Black is the one-space low approach (~13%) [1], and it is a key variation to know since it activates aji at a and b that can potentially destabilize White's position.

It is most commonly played by professionals when Black has a position on the upper right side, or if Black wishes to disrupt a framework. In this situation, the one-space low approach is almost always better than more distant approaches because it achieves two things in one move: (A) it serves an an extension from Black's enclosure, and (B) it activates aji inside of White's base.

The two-space low approach (marked circle) is generally worse than the one-space low approach because it is too far away to activate aji and only serves one function (an extension from the enclosure). Aspiring kyu players should seek moves that achieve multiple things with one stone, and one-space pincers/approaches should be preferred by default unless the player can think of a reason why it shouldn't be played.

In Chen Yaoye (9p) vs. Shin Jinseo (6p), Black played a one-space low approach, pressuring White's base. Strong players are typically reluctant to respond locally, since there is no efficient way to fix the aji, and responding would mean giving away sente. Professionals tenuki from the local position a majority of the time (~28%) [1], although other options are to pincer the approach stone or counter-approach Black's base. The

(in gote) or jumping out at the marked square (in sente) to naturally fix White's shape.

The 2-8 invasion is the most common invasion of White's formation after the one-space low approach is played. It threatens to take away White's base or split White's stones. The invasion can result in complicated fighting, and White will traditionally (pre-AI era) make concessions to simplify the position. Strong AI programs seem to believe that White should not avoid the fight, as the peaceful result is too good for Black.

The 3-7 attachment is another common invasion of White's formation after the one-space low approach. See: 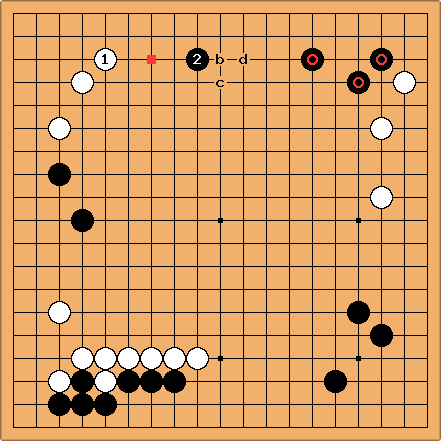 Extensions along the side of the board are common. According to the corners, then sides, then center go proverb, a side extension can be a good move when all of the corners are already occupied.

In O Rissei (9p) vs. Takao Shinji (9p) (2012), White chose to enclose the top left corner with a kosumi, finishing the last major corner. It is plainly apparent that the biggest place on the board is the upper side, so Black would like to play a stone somewhere on the top.

Which extension should Black play?

In the game, O Rissei (Black) chose to play the four-space low extension.

Playing at the marked square is unattractive for White, since it would make White overconcentrated. Meanwhile, White does not want to invade Black's formation because White cannot make a base inside the 4-space extension, and White has no support. Formermore, Black's top right corner is strong. White's best local move is perhaps a shoulder hit, but White does not have very good potential in the center of the board. Ultimately, there isn't a good response for White in the local position, so Takao Shinji ultimately chose to tenuki.

The best side extensions often (A) achieve multiple things with one move or (B) denies your opponent from playing a good move. Choosing the best extension can often be difficult, but recognizing a good opportunity to play an extension on the side is an important skill of mastering the opening. 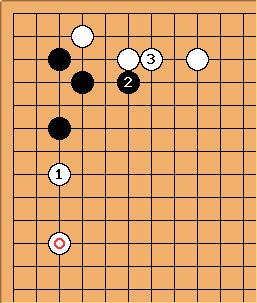 Here we discuss the exchange of 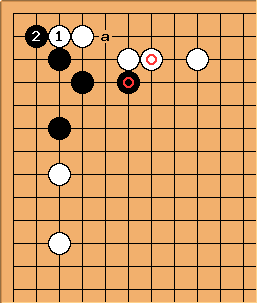 Later, it is possible to answer

, securing the base. However, the exchange of

strengthens white, losing the possibility of any invasion in white's two space expansion on the top. Also, white gains significantly in the exchange of

(because if black plays at

, black can aim at a to capture a white stone). So the price to pay for the tenuki is considerable. 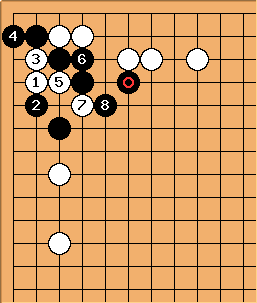 The good thing is, the invasion at

is no longer possible. Black applies the

tesuji mentioned above but this time it works without the precondition of a working ladder. The reason is, with

, black can play at

, and white is finished.

Losing the base in the corner 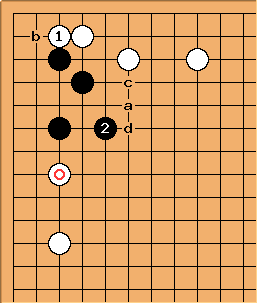 For black to tenuki when

is played is not a good idea.

gains substantially in territory and sets up an attack.

or a is the correct play, but black has not gained much territory or influence in this move. For

to play at b is a dangerous choice.

is a poor move, as is a. c is the most common answer, leaning on a strong group to come out. If you want to jump d is a good shape for this, it runs fast, aims at pressing on the group on the side and attacking at c. (50 hits on this shape (exlcuding the 2 space extension on the left, adding it makes little difference) in my GoGoD: 34 @ c, 5 @ d, 1 @

RBerenguel I can't give a personal analysis on

, but this is the move Sakata suggests in Suji and Anti-Suji of Go, Model 6: The one-point jump suji 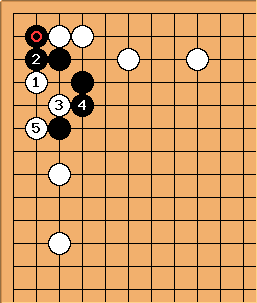 If the ladder towards the lower right is good, then

will steal all of Black's territory, rendering eyeless. Note the important assumption of the working ladder, which we illustrate in the subsequent diagrams. However, white can always choose to play a ladder breaker somewhere in the lower right, so the danger still lurks. 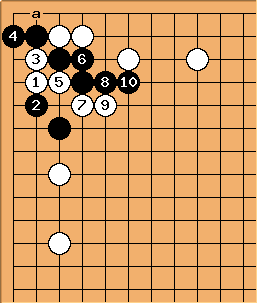 This diagram shows the start of the sequence that leads to a ladder. Note that

is a tesuji: if

is played at a, then black b captures the two white stones by double shortage of liberties. 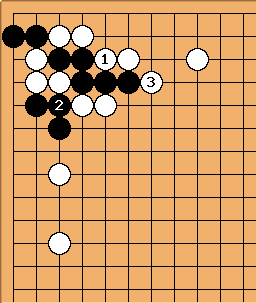 The ladder refers to

. If this ladder works for White, then Black collapses totally. 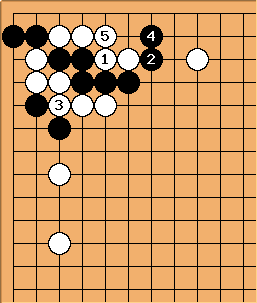 Therefore, if the ladder is not good for Black, Black may try to resist by making the hane at

. This may be seen as a trick play which breaks the ladder. The correct response is to connect at

. Black can only descend at

Black has gained nothing.

Below we discuss some finer details of this variation. 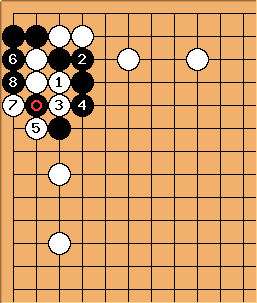 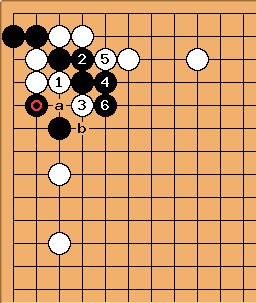 first is a mistake for White. After

, if White a, then Black b, then is reverts to the previous diagram, where White is captured. 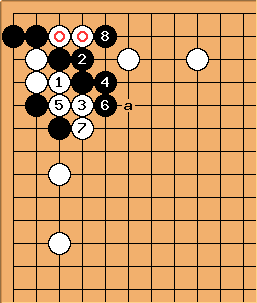 here allows Black to capture two White stones, and this result favours Black. Note that the turn at

is played directly at

at a seals the Black group in. 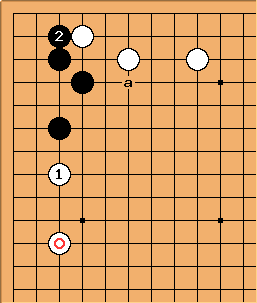 Assuming there is some white stone or structure, say at

. We will say that

are miai. In fact,

is very big and gives the black corner a base.

(The main alternative to

is Black a in the centre. The use of this play is discussed at 4-4 point low approach low extension, standard joseki, pushing in the centre. See also [1] below.)