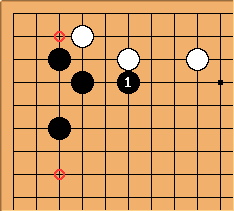 This page discusses the use of

here in various positions arising from the 4-4 point low approach low extension, slide, 3-3. There may be white stones added at the marked points. 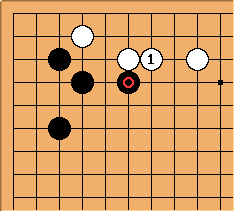 If White reacts with

, she has no shape problems here; but on the other hand Black can consider

as kikashi. No further local play by Black may be required. 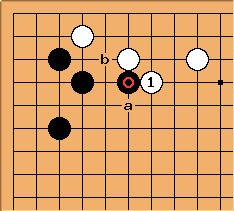 If White resists more strongly with

here, this looks like the start of a pushing battle: that is, White is contesting Black's right to develop influence in the centre.

Black's ideas here are a (attach-extend) and b (attach-block). Black should have decided a plan in advance, depending on any nearby white stones. 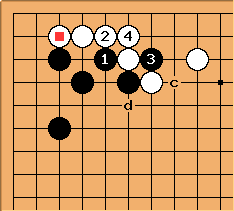 For example, if White has already played

here is the only sensible reply to

is available to Black; and now Black has options to fight at c or develop further influence at d. (Playing atari and connect starting at c makes sense here but if Black wants to play at d it is better style not to play atari first, leaving

to annoy White. This is another example for One-Two-Three.) 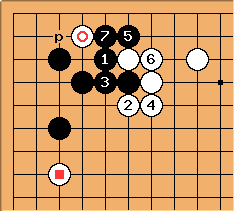 If however the white stone at

is present, the attach-block idea by Black fails to attack it strongly. In fact White may find it natural to sacrifice

this way, taking outside strength. The difference from the previous diagram is that it is unacceptable to White to play this way if it means the loss without compensation of a second stone at p. 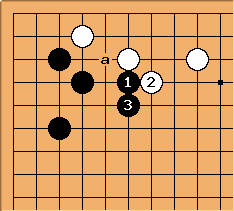 If Black is playing for influence here, it is natural in fact for Black to play attach-extend first and aim at the important play at a (it is a bulge point, a key to good shape here). 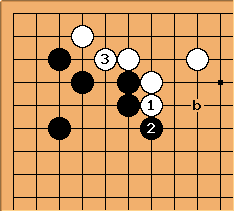 , White will probably feel like making a move such as

(or b) to ensure some shape for this group. That means that Black has 'won' a short pushing battle here: Black has gained power and White hasn't ultimately been able to compete. Of course evaluating this result is another question. 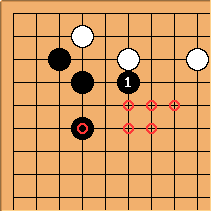 played rather than the low extension, Black's access to the centre is much better. Black doesn't need to play

simply to build up a central framework, though: jumping directly to one of the marked points may be possible. 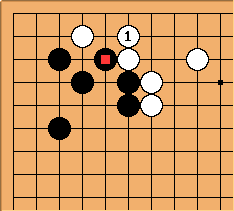 here; which may sometimes work in endgame terms, but which are lacking both in terms of shape and in fighting spirit.

Grauniad: Wouldn't "4-4 Point ... Centre Push" be a shorter and more consistent name for this page?

Charles Shorter is indisputable. Maybe the change would induce comments along other lines? After all push has a page and

of the first diagram isn't a push, it's a contact play. Ever feel you can't win? (Away from the go board, that is, where the feeling must be common.)

Grauniad: Indeed. I can't win on the go board either! Seriously, you're doing a heroic job Charles with this Joseki page writing and renaming task. We're all indebted to you.