Whole Board Thinking In Joseki

The teaching method is compare and contrast. A set of seemingly similar board positions are presented and one is asked to choose among several joseki continuations in each position. The answer pages explain the differences in board position and their impact on each joseki choice. See the sample problems and answers below.

Blurb for Volume 1:
"Think globally, act locally" is useful advice, but how do you do that in Go? Yilun Yang, a master of Go with an innovative approach to teaching Western students, shows you exactly what this means for understanding 3-4 point joseki. Using over 100 elegant examples, you learn how to use a whole board perspective to do the right thing locally. This first volume focuses on joseki involving a low, third line, approach to a 3-4 point stone.

Blurb for Volume 2:
With tens of thousands of patterns to choose from, the study of joseki might seem daunting, but not after reading this book! Mr. Yang's simple but powerful principles for globally consistent opening play will free you from rote memorization. This second volume on joseki focuses on high and far approachs to a 3-4 point stone. Don't miss your chance to leap ahead instead of struggling to keep up.

--Chuck Robbins of Slate and Shell

BramGo: Recently I was in my local go-shop. And I must say these 2 books were the most interesting ones I could find. They assume you know most joseki variations allready. So it really only concentrates on "when to use which move". So this is actually the only high-quality information on 3-4 point joseki that I have ever seen. (with all respect, but Senseis Library and books like The small Fuseki Encyclopedia of the Nihon Kiin are not even worth comparing). And it comes in a very handy big format with huge diagrams and very little text (to the point). It reads very fast.

I started out by reading the 2nd book (high kakari's and far kakari's, I don't often play low kakaris) It really opened my eyes in a lot of situations. You can really feel that this book is written by a strong player. He isn't afraid to say that a certain move is wrong. (I've read some other books that are more like "this is possible, that is possible, yeah that too, and actually everything is possible". At the end of a book like that you are left confused.)

After reading the first 60 pages of the 2nd book, I decided to read the 1st book as well. Then I discovered that the 1st book misses an introduction problem. Because it is not really clear to me when to use which pincer. In the 2nd book they do talk about that but in the first book it is left out. In both books they do explain when a certain reply is good or bad.

I am just wondering, is there anybody who knows a good website or book that explains this for me?

George Caplan Another book with a similar approach is the out of print The Great Joseki Debates. The material also appears in older Go World's. Mr. Yang has given guidelines for choosing the correct pincers - but I cannot recall if it was in workshops I have attended, or in Fundamental Principles of Go.

Shaydwyrm: Fundamental Principles of Go has some material on choosing a pincer (high or low, tight or loose). It doesn't go into nearly as much detail as Whole Board Thinking In Joseki, but it's a good starting point. I remember Mr. Yang going into the topic in one of his KGS Plus lectures as well, but I don't know which one (I let my subscription lapse and lost access to some of the older lectures).

DeaconJohn A Way of Play for the 21st Century (1999 by Go Seigen) is devoted to the same topic. Some differences: 1) Go[1] Seigen's book is a collection of studies, not a collection of problems, 2) Go Seigen's is one volume (hence about half the price), 3) GoSeigen's includes hoshi (4,4 point) joseki although it emphasises the high approach to komoku (3,4 point) joseki. Go Seigen's book is somewhat prophetic as he gives some predictions regarding josekis that would be popular in the early 21st century, and his predictions turned out to be correct. He also gives absolutely beautiful explanations of the concepts underlying his approach to fuseki. (This is not the fuseki of the New Fuseki era, but rather the approach he favored in his later years.)

These problems are taken from the section of volume one entitled Two-space Low Pincer. All four problems appear on the same page and are to be solved as a single set. In each case there are four solution diagrams: one of each of the four possible moves listed in the problem. Answers for only the first of the four problems are shown here. 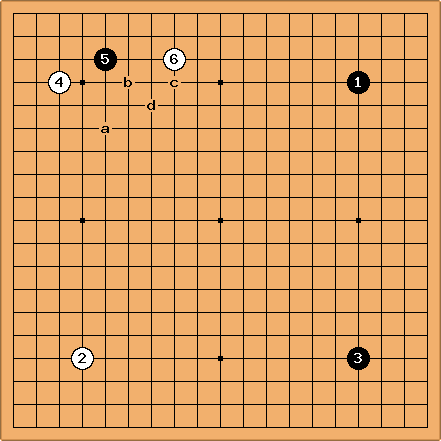 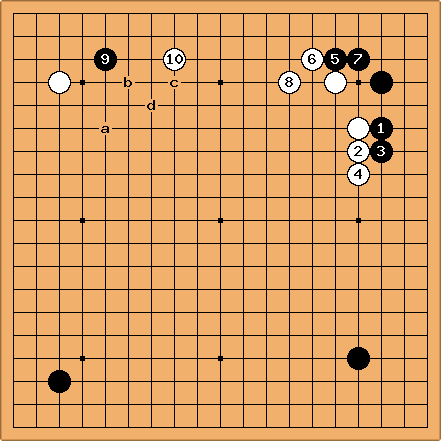 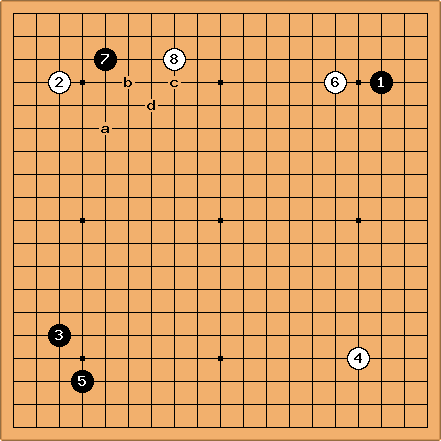 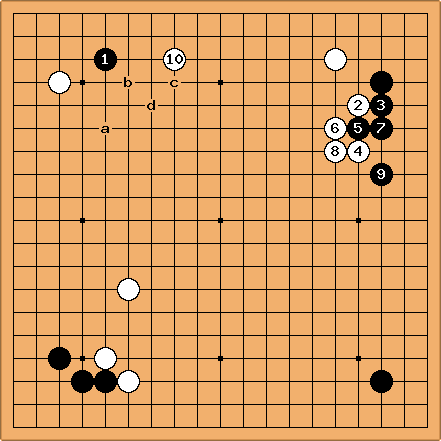 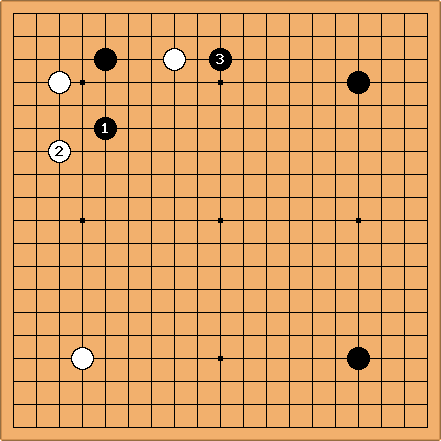 The jump make a strong attack

At first, it looks like Black is trying to escape with

. White must help the corner with

; then Black squeezes with

looks like a splitting move. Escaping and attacking with the same move makes this the correct choice 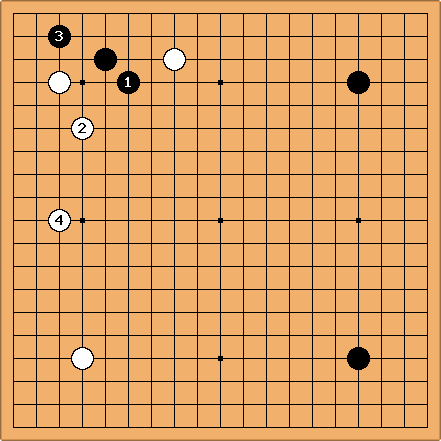 The diagonal move is defensive.

is a solid and slow move. Black makes a base with 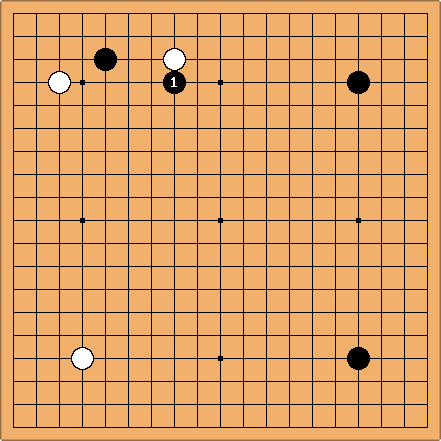 When Black attaches with

, he strengthens a weak stone. As in most cases,

Note: Problems 44-46 analyze the responses to

and when each is appropriate. 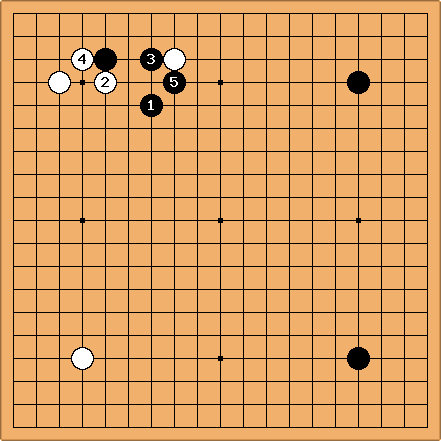 The double diagonal give away too much territory.

is a light move.

is the best answer. After

, both sides have thick shapes. White comes out ahead in the race for a territorial advantage.

[1] Go Seigen's family name is Go and his given name is Seigen. The form Go Seigen follows the oriental custom of writing the family name first.