Two of the single-digit kyu players at the Madison (WI) Go club (I won't name names) have been insisting that I -- and other neophytes -- "forget about the goal of the game" (ie, making territory) and instead merely work on keeping all of our stones connected. If this is done, they declare, then our opponent will always lose.

This often leads to a rush of scientific debate, and usually someone breaks out a board and makes that cute little diagram where Black has all the points inside the third line, and White has all the points outside of it. Fine, whatever.

I want second and third opinions. I can see some merit in this idea, but it just feels wrong. Maybe it's because I've always heard that territory is the thing, but keeping it all connected feels like a back-door approach. Maybe it does usually work, but it doesn't seem like the kind of strategy I would want to rely on. If one stone is cut off, then, my whole plan is out the window -- and isn't flexibility supposed to be key?

Of course, all of this is still hypothetical in my case, insofar as I've yet to play a game where I can actually keep them all connected.

Arno: keeping your stones connected usually is a good advice in high handicap games. After all, White tries to separate and kill Black in these games. If this is applicable to even games as well, I don't know. Completely forgetting about territory might be a little bit extreme.

Ben Shoemaker: I think the benefit of trying to connect all your stones, is that presumably they will all be alive at the end of the game. By this theory, in general, the player with the fewest number of groups will be the winner. My experience fits in with this, but more advanced players may disagree. Perhaps a middle ground would be to try to minimize the number of groups you create, and ensure that they all have plenty of room to live.

evpsych: I would like to see stats from historical data (either go servers or pro games) on number of groups vs. winning proportion. e.g. a 3D graph in which x=smaller-number-of-groups y=larger z=proportion-smaller-won. In fact, here's a page for it, since I found no other: WinningStatistics.

Goran Siska: I think you should try to forget about making territory. It is (in my humble opinion) one of the hurdles you need to cross to reach shodan. Here's the idea: play a game or two without ever counting something as your territory. This will allow you NOT to respond to every move your opponent makes and sacrifice even large groups if you judge that rescuing them would make your overall position worse. The thing you should be concentrating on in those games is making thick shape and which stones are important globally not locally. You should think about how you can make your groups safe from further attacks or kikashi and not how you can make an extra point or two with your response. I'm not saying counting or territory doesn't matter, but it may be beneficial to your growth (:)) to put those concepts and ideas aside for a bit and return to using them after you mastered a few new ones. My 2 cents anyway...

TakeNGive: It's worth reading Kageyama's opinion, in Lessons in the Fundamentals of Go. He mentions a game with one of his students, who normally took 6 stones handicap. This time the student took 9 stones, saying that he would win by defending them. Kageyama won, and said the reason was he had one big group compared to Black's several small groups.

I think that if you try to connect your handicap stones, you will naturally make large, strong positions. (This doesn't mean 'save every stone', though; often, the best way to connect some stones is by sacrificing less important stones.) If your positions are strong and large, then what's left for White? It is indeed a backdoor approach; but that's one of the wonderful things about Go. (I love that proverb, go left to attack right. It reminds me of Aikido practice.)

William Newman: If you're having trouble appreciating how this works, try recording two or three of your games all the way through to the end. (The easy way is to play on the Internet and have the SGF emailed to you or save it directly from KGS.) Then review the games, looking at how many times you were forced to do something because you were getting down to the minimal amount of eyespace you'd need to live. If you had six groups on the board at the end of the game, you had to do this at least six times as much as if you would have if you have one group on the board at the end of the game. It's not easy to estimate how many points you lost for each way your opponent was able to force you, but maybe you can guess within a factor of two. Now look at the moves you made where you had a choice between local territory and global connection, and you went for local territory. Estimate their total value the same way. You may find that the total cost of unconnectedness was greater than the benefit of greediness. (And if you're having this argument with a 1 kyu, you are at least very likely to find that the total cost of disconnectedness is greater than you realized. The benefits of grabbing territory are visible immediately. The costs of unconnectedness are often delayed by a hundred moves from the decisions which caused them, and so are relatively easy to underestimate.)

Bill Spight: I usually think of connection from the flip side: Divide and conquer!

Bruce Wilcox's sector line idea is related. It is a good idea to cut sector lines, thereby preventing or at least hindering the opponent's connections. I have heard that Bruce's teachings have helped even single-digit kyu players (AGA) advance several stones in a very short time. :-)

Takagawa wrote that Go is a game of territory, but it is almost impossible to make territory. ;-) Kitani pointed out that, even when a player has "territory" (a fairly secure area), the opponent usually has an effective play inside it. Takagawa said that actual territory arises from contact fights. He advised thinking on a large scale, letting the territory develop naturally.

HolIgor: Interesting. Very often after a lost game I tell myself to play closer to opponent's chest. That's the same idea as territory that arises from contact fights. It seems to me also that the game is more about destruction than building. You build actually as a threat to ruin.

Scartol: Thanks for the advice, everyone. I've come to recognize "Keep all your stones connected" as valuable advice, but not an ironclad law. And, as if to prove myself right, the gods sent me on a 6-handicap game this evening in which I was able to keep everything connected, and still lost. The end result looked like this: 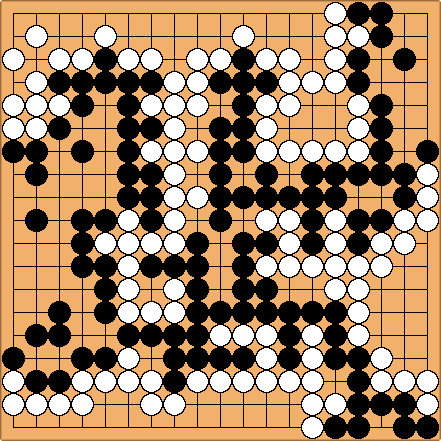 Dieter: I'm reminded of the disgraceful discussion we (me, David Carlton, the rest of RGG) had with Milton Bradley, about Atari Go Teaching Method. I've come to realize that much more Bad habits come from thinking about territory than from having learnt the game using Atari Go.

People who are bred with the idea of making territory, myself included, have a hard time to unlearn moves like these: 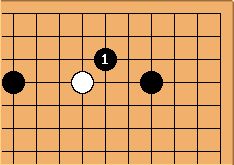 Don't want to go off topic here, but lately I did another introduction event with about 30 attendants. Those who where taught atari-go learnt to connect their stones (less easy to capture them) and to split those of the opponent. Territory came as a natural thing: "no one captures more than 5 stones, so here's the real stuff for you: the one with more surrounded empty points and prisoners wins". Those who left atari-go early (we want to play the real stuff) started making the most crumped spaces in the corner.

HolIgor: My first board was 13x13 and I developed very territorial style very fast. Then I played a 19x19 game in a tournament, which was the second time I ever played on the full board. In the beginning I jumped by 3 spaces on the third line and thought that I was doing well. Then I had to solve a problem of how to reduce my opponent's moyo about quarter of the board large.

This continued for a long time, because the first games on the 13x13 board taught me that getting territory was good. All games had the same scenario: get territory and then survive somehow. Then, once, quite accidentally I obtained a wall. That win was so easy that I got at last the value of the centre influence. It did not solve all my problems but I became a stone stronger.

Björn: I'm reminded of a game I recently won. My opponent seemed to not want any territory, but took great pains to play dame moves just to keep stones connected that were already alive independently. After the game, he remarked something to the effect of "Wow, 7 groups, and you still won!". The point I'm trying to make is that whilst staying connected might often be worth more than it may appear at first, one shouldn't try to stay connected at every expense.

Since Atari Go was mentioned above: I do not see how learning Atari Go would help people make territory. In particular, a friend of mine taught himself go by learning atari go. Watching his first "real" go games (9x9), I witnessed him getting a grand territory point total near 5. He was content with getting two eyes, as he had learned that one cannot lose once one's stones are secure and connected. His opponent, who had never before played go, nor atari go, ended with over 50 points.

BobMcGuigan: There is a proverb from David Mitchell's book (I think) that is relevant: "If you have six groups one is dead". Like all proverbs this is not infallible but merely a guide to correct thinking. I think studying the games of Otake Hideo is beneficial for understanding how thickness can lead to territory. He seems far behind territorially but late in the game territory just wells up, seemingly from nowhere unless you know about the value of thickness.

JAC: Would someone explain why 1 above is a bad move? It's not as if the two black stones in the diagram could be connected. What is the preferred move in that example that emphasizes connection over territory?

RueLue: For black: two places below the left black stone. It seems to be an example from a handicap game, but you play it the same way in a normal game - depending on the stones in the here not visible parts of the board.

hnishy: There is a Japanese proverb Issekigo ni make nashi (一石碁に負けなし), meaning 'all groups connected, never lose'. It's OK to sacrifice one or two stones here and there.