This is from problem 11 of Whole Board Thinking in Joseki Volume 1, contrasting a correct choice of joeski versus an incorrect one. 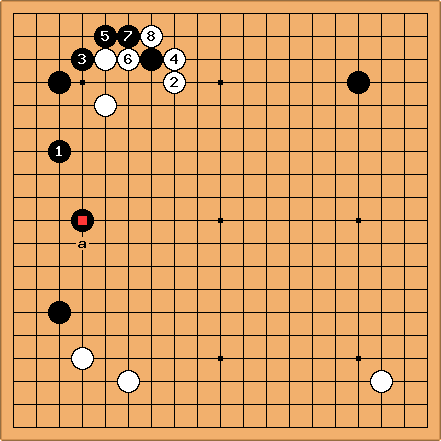 The book says that

is not well placed (it should be at a). 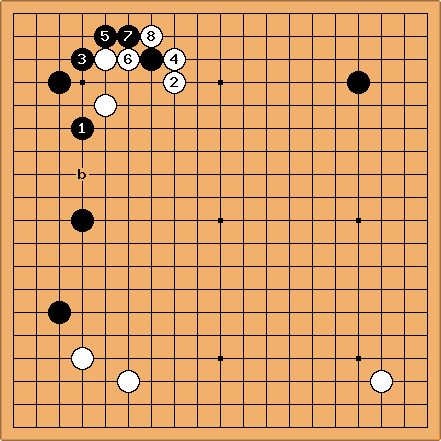 Therefore black should play the joseki differently ending like this

Iff:Now I don't understand this at all.

For me the above (incorrect) position looks a lot better for Black. For me, in both positions the White group is safe, so the difference is really just the Black framework at the left. In the incorrect solution diagram, I can see a lot of secure Black territory, whereas in the other position I would worry about a White invasion at b (at some point in the future). Also in the above position I`would prefer

where it is rather than at a to avoid gaps between

So evidently I have a lot to learn...

Could someone please explain this to me?

Bob McGuigan: I don't consider myself strong enough to explain Mr. Yilun Yang's thinking but a couple of points come to mind. First, in your first diagram, marked Incorrect Play by Black, the black stone marked with a circle is too low relative to the corner above, hence the comment about Black's position being low. Second, the black stone marked with a square is intended to strengthen and build Black's position on the left side but it is closer to the strong black stones in the upper left corner than to the weaker single stone toward the lower left corner, hence it suffers from the fault of strengthening an already strong group. The space between the stone marked with a square and the stone toward the lower left corner should be smaller to help that stone more.

As for the invasion at b in the second diagram, Black has forcing moves against the white stones, such as at c in the diagram below: 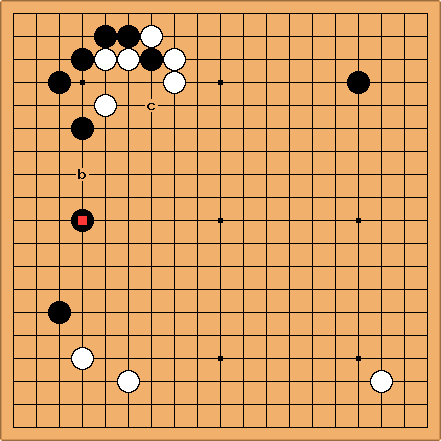 So Black can mount an effective attack on the invading stone or build a position on the outside.

Dieter: I want to add that in the first diagram the left side is not at all "secure territory". However, the need for White to invade it is not so high, because the potential territory there is not so big, due to the low position of the criticized move.

Besides that, the analysis is not at all trivial to me, while I agree with Bob's comments. 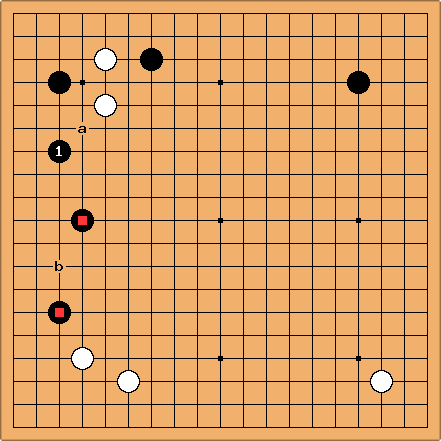 Dave: I do not have the book, so I do not understand all of the discussion. However, if we go back to the beginning of the joseki, the choice of

here instead of "a" looks too passive when the marked stones are on the board. Black should want to be more aggressive. The one-space pincer is itself aggressive. If play does not keep the pressure on White, the pincer ends up too close to the resulting White position. On the left side, Black has left behind the invasion point at "b" for White. Therefore Black needs to make sure that he gains the maximum benefit in the upper left.

Also, on the matter of invasion points. Since White already has one on the left side, it becomes easier to leave a second one. Why?... Because White can only invade at one :-) Assuming that both points survive the continuation of play in the upper left, then whichever one White chooses will naturally result in Black strengthening the second as a result of White's invasion.

unkx80: I am not quite competent enough in such topics, but here are my two cents anyway. 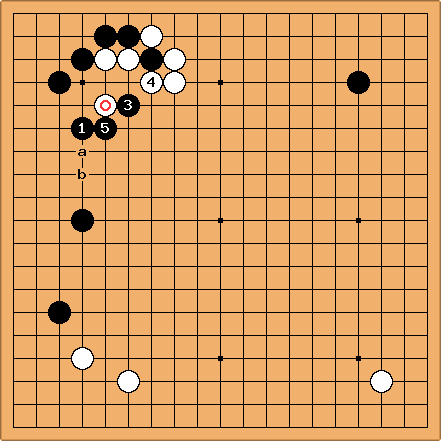 The correct play at

puts pressure on the

stone. If White tenukis, then

can increase the sphere of influence.

may be tempted to push at

. But Black will then be happy to play at a, turning the upper left side into solid territory.

If White invades at b, then Black will play at

anyway. Chances are, if Black cannot make territory at around b, then this territory simply gets shifted to the lower half of the left side where the three-space extension is. Both pieces of potential territory seems about equal in size. In this case, all White has done is to create a weak group for himself. 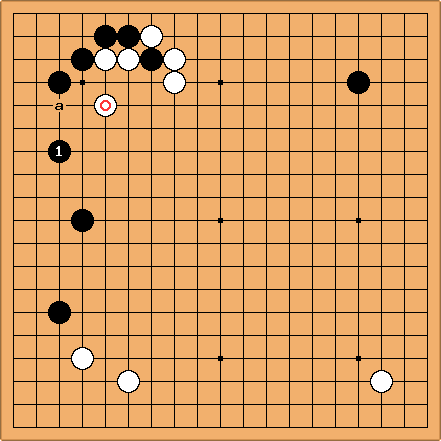 here is slack and puts no pressure on the White stones at all. Now White is free to play elsewhere. Later, White may be able to play at or around a to make Black's position even lower, so the territory is comparatively smaller than the potential sphere of influence obtained by the correct move.