How Do You Learn Joseki

I've avoided really learning any josekis up to this point in my Go playing because I wanted to avoid the amateur mistake of playing a joseki because it is a joseki without regard to the whole board situation. Now I'm getting to the point where I feel like I could really profit from a study of joseki, but I'm not sure how to go about tackling them. Does anyone have any pointers on how to learn joseki? -- Blue Wyvern

It depends on how serious you are about it. What I often do - and what has proven useful to me - is studying joseki I encounter in my own games. Especially those where I had the feeling that I played bad. I look up these josekis in a dictionary (or here at SL :o) and try to understand why my move was bad. I also try to apply my new knowledge in following games and see how it turns out. Usually, this means that I play an even bigger blunder and I'm back at the dictionary again :o) But overall, it is a very helpful process. -- Arno Hollosi (1d)

Dave Sigaty: I think that I am much like Arno. I mainly study ("check" is more accurate :-) in reaction to something that happens over the board either to me or in a game that I watch. It is very seldom that I study something in a forward-looking way where I look at a new joseki with the intention to try it out in my own games.

I don't find that attempts at intensive individual study help me that much. I quickly become bored and start to play around with the variations. This is wasted time in terms of advancing my skills regardless of how enjoyable it is at the time. Instead I find that presenting issues to an audience (both by contributing to SL and by writing reviews for the Go Teaching Ladder) adds some additional discipline that lets me dig more deeply.

However, regarding Joseki in particular, there is one thing that I did that I think helped a lot to get a sense of Joseki as a whole. I was just getting started in Go (mid-kyu player in the U. S.) when Ishida's Joseki Dictionary was published in 1977. I remember waiting impatiently for volumes 2 and 3 to be published. I read each one like a book - without trying to analyze each line. I would recommend this to anyone.

Most of all you should play what makes sense to you as situations arise in your games. Then, as often as possible, think about the results. After that check a dictionary if you have one available (and since there are some on-line now everyone has something available :-).

deft: I did the same thing, read Ishida quickly through like a book - it was really valuable because you come to appreciate what an even exchange of territory/thickness/fighting potential should look like. It also teaches you the basics of tewari (changing order of moves) analysis. After that, I've been looking up the joseki that appear in my own games. I am now (weak) 3 dan, so it must have done me some good ;-)

RobertJasiek: The Ishida teaches only by examples. So it misses what is possible: A general theory for recognising and justifying an even exchange and a general explanation of every tewari method.

I believe that it is helpful to look in the joseki dictionary to know what is considered a good sequence of moves. But the true understanding comes when you play this particular joseki and play it a lot. A pattern by itself is not that good as the understanding of what kind of possibilities it carries, how big are continuations, what changes in the surrounding situation would require a reinforcement of the position, and so on.

Thus a study of a joseki, even the simplest one, is a long process. The book gives you a simple idea only.

I would suggest a lot of experimenting with moves to learn good and bad sides of them. Very often that makes you understand the value of the move from a book. It is understandable the weaker players see the local situation only partly, only territory and influence, for example, but stability in the fight, eye forming potential and other subtle things have to be taken into account too. For example, 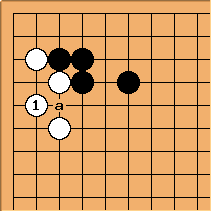 To weaker players such moves do not come to mind at a glance. But we can appreciate the idea when looking through the joseki dictionary.

dnerra: I think the question in the title of this page should rather be: "How do you learn by studying josekis?" I agree with most of what has been said above, but I would go a bit further than Dave and deft: I think you should study joseki the same way that you study professional games: Try to guess the next move, be VERY surprised about the moves you did not expect, try to understand why you did not expect them etc.

Since joseki moves are more "universally true", I claim there is one thing you can learn from josekis better than from anything else: good shape.

Could anyone suggest what book one would start learning joseki with, as a low-mid kyu player? (If thats even an appropriate level to approach joseki?) I've heard that "38 Basic Joseki" is a little limited and the Ishida is a bit intimidating. -- adamzero

Rui Naiwei's "Essential Joseki" is a good compromise between the two and is quite readable. -- Dan Schmidt

RobertJasiek: I would recommend a combination of books providing joseki understanding and strategic concepts, especially my books (because they provide the most detailed general understanding) (2, 3, possibly also 1 if you do know yet which approach moves, pincers and extensions are correct), but also other books on some strategic concepts (the more books the better): Attack and Defense, Strategic Concepts of Go.

Words of wisdom from Kageyama on joseki:

The Proper Way to Study Josekis

1. Don't think that all you have to do is learn the moves. That is not studying the joseki.

2. Every stone played by both sides in a joseki is the best move, so it is important to know the reason for it -- its content, its meaning. If you can convince yourself as to why the stone is played where it is and why it is a good move, then you have done some studying.

3. Joseki moves are always the best moves on a local scale, but they sometimes become the worst moves in relation to the surrounding positions. This is what keeps go from becoming dull, what makes it interesting.

--Scartol quoting from Lessons in the Fundamentals of Go

RobertJasiek: The advice is right but here is more: Some Thoughts About Studying Joseki.

JamesA: I quite like the 3 Get Strong at Go books on joseki. They are a good way to learn what to do if someone doesn't play the joseki, and therefore why the joseki are joseki! Also, it is good reading practice at the same time.

Selecting sequnces from various books, I have created a 'small' (100K) sgf file of all the standard corner sequences I think I should know.

Within it I have used the following conventions:

Maybe I will need to create labels that will mean:

Anyway, I am attempting to learn the sequences using the CGoban2 sgf editor. After 'marking variations' I go through the file (well a 10K section of it) and any branches I get absolutely correct, I cut. If I make a mistake I have to go up the tree to a new branch. After one pass through the file, I save it, then repeat the process on this file an hour or so later. Repeat until file is empty. When I can empty the file in one pass, I'll try the same procedure without marking variations.

I will defend this rote learning method by saying it is simply the first part of a study program:

For those who can afford it, The Many Faces Of Go has a joseki tutor that can be used exactly as JamesA suggests without the necessity of compiling one's own sgf file. -treidling

BobMcGuigan: I'd recommend the two volumes of Whole Board Thinking in Joseki by Yang Yilun. Knowing what issues dictate the choice of a joseki is about as important as knowing the moves of the joseki itself. Otherwise you might happily play all the moves correctly and end up with a terrible result from a whole-board perspective.

HolIgor: There are four corners and four sides and at different stages of the game the choice of joseki is different. There is a first corner joseki which is played on the almost empty board, so you choose with regards to the type of game you want to play. Then the second and the third corners are played taking into account the first corner joseki, direction of stones etc. And the fourth corner rarely is a joseki. It is whatever your reading of the game tells you. For example, I like to play for territory in the first corner and influence in the second and the third and the rest is just a fight.

BramGo: Creating BruGo was the fastest way for me to learn joseki. And I am still learning new variations every day. Creating your own dictionary certainly is the most structured way to study joseki.

RobertJasiek: From experience, I agree that media creation is the most structured way of studying joseki; however, much general theory must accompany the dictionary. But not everybody has the time to create his own dictionary. For those with less time, it is good to read such joseki books (links see further above) that provide access to joseki understanding and reasoning in great detail.

Tapir: A nice way to study, is to take a game at move 30 or so and reconstruct a likely move order. (I have seen a chinese program teaching joseki by giving the resulting quarter board and letting people reconstruct move order as well, btw. without any explanations given - the understanding is then just the outcome of a well-designed set of sequences offered to the learner.)

HughJFan: This year I've been mainly studying Joseki. In my opinion, the DailyJoseki website really changes/helps learning Joseki. My 'method' has been to play through a set of Joseki on that web page repeatedly, every day. I keep repeating this until I start to remember them, especially the vital points (then I keep repeating them until I'm sick of them!). At the same time I read the theory about them moving from simple sources to more definitive sources, for example the entry (if there is one) in 38 basic joseki, then a mid-range book then Ishida (I don't have the new edition yet). I say mid-range one rather than Essential Joseki because whilst I have that and I do like to see what it has to say I much prefer the The Nihon Ki-in Handbook Series books even game joseki and star point joseki. Combining DailyJoseki with book study is perfect for me as the books make the sequences easier to remember and learning the sequences with DailyJoseki makes the texts easier to follow.