I often like to think of the Go stones as if they were metal spheres embedded in semiconducting material, and imagine what 'capacitances' and 'resistances' exist on the board.

Resistance, naturally, increases with distance. It also decreases if more contact points are available on either side of the gap. Capacitance is the other way around. A good shape move seems to compromise on distance - you don't always want to move slowly, but it's important to stay connected. This could be represented by seeking to minimize the product of resistance and capacitance - the 'time constant'. A good 'connection' allows for fast circuit response, then; an idea which really appeals aesthetically to the EE set. Unfortunately, I don't know that it would be possible to mediate the way that real-world resistance and capacitance work, with the given knowledge about shape. The increase in resistance with distance should be approximately linear, while the decrease in capacitance is roughly quadratic assuming spherical stones. That already says we should always put the stones very far apart, which isn't right. Representing the stones by infinitely long, thin rods perpendicular to the Goban would get the orders of magnitude right (if I remember my 1st-year EE right - I luckily haven't had to touch the low-level stuff much since. Hooray for *Computer* engineering ;) ), but would suggest any distance is equally good - we need to introduce physical dimensions, and then the calculations get really hairy.

Representing the stones by infinite rods is the 3D equivalent of just formulating electrostatics in 2D. I think the quadratic decrease in capacitance with distance is true in 3D but not in 2D. Also, the game happens on a small enough scale that the difference between euclidean distance and grid distance has a significant effect. Finally, why do you make the board a semiconductor rather than a dielectric? - Migeru

Anyway, I had the idea for capacitance first, and then resistance seemed a natural complement. It all started when I began noticing formations on the Goban that would remind me of capacitors: 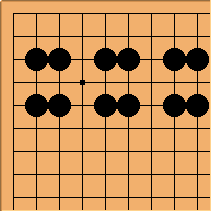 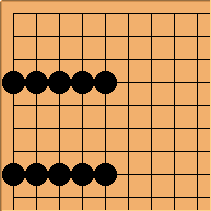 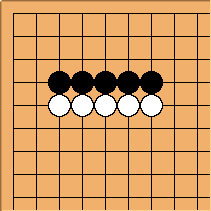 kungfu had a Magnetic Stones Idea, a way of thinking about thickness in terms of magnetic force. It's not quite the same thing, so I've moved it to a separate page (which also has the benefit of making the link from his home page (at Kungfu) work properly :) )