This is a beginner page. Some of my examples may contain moves that you yourself would not play: this does not mean that no one would play these moves. In instances where the moves are weak or the analysis incorrect please feel free to state why you would not play these moves; but this is not the focus of the page. The idea is to look at how and where you should and shouldn't use certain shapes and connections (viability of moves is a quick-fix answer which will prove useful but lack of a fundamental understanding of the shapes will mean similar mistakes are made in the future).

I would appreciate any assistance people can give as long as it doesn't consist purely of move-order analyses. Anyone who wishes to add material is welcome to do so as everything is helpful in some way. Thanks for reading this part of the page and I hope this turns out a little bit clearer than the first attempt.

Thanks a lot to Charles for his help with this page.

You can make good shape and use good connections: and still end up with problems either in the form of having to give up one more move than your opponent to secure the position or being forced to create bad shape. [1]

What happens when certain shapes and connections meet?[2]

Charles General comment on this interesting material. I think there are not quite enough 'first principles' ideas quite to push this through. The general ideas of tewari and local tally evaluation in practice get supplemented by reference back to some sort of joseki as a given. For example here I checked this against pro play: 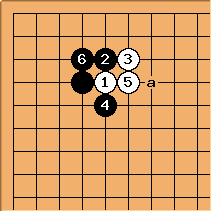 which is to Black's advantage (as you'd expect:

is far from being a good idea except on special occasions). So we know that

played at a would only make matters worse ...

I would like to look at the full triangle a bit more carefully than on LovedInEmerald/How good shape becomes bad shape; which may create content overlap or be completely wrong. Still, that's half the fun of trying to write pages :p. 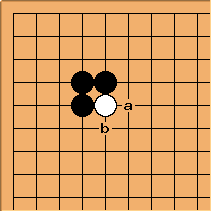 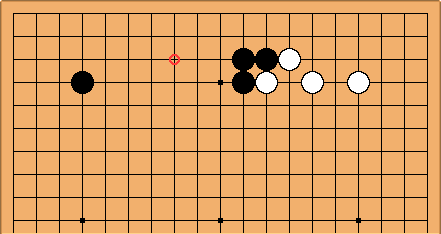 An attack can come near the marked point. 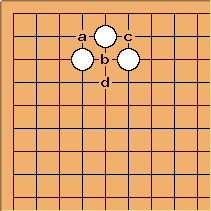 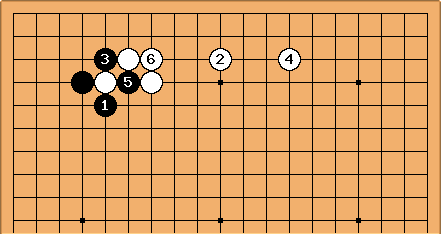 What happens when these two shapes collide? In the epic battle of thick versus thin there are obviously two possible outcomes, for several different reasons.

What happens when there are no other stones in the area? 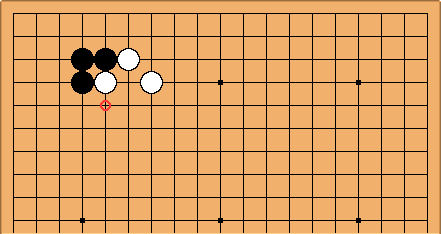 This is where my analysis may start to become wrong so if anyone has any more accurate ideas on correct play from this position then please feel free to contribute :).

The marked point seems like the key area to me as given sente with either colour I would play there. The difference between the colours is of course that I don't believe Black has to respond to a play at the marked point by White.

Charles From the point of view of getting ahead, Black should, really. 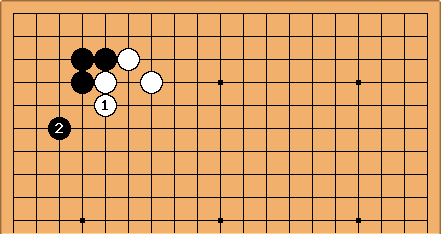 If I'm correct in this assumption then Black could be seen to have gained a move as locally White's position is as solid as Black's but with one more move (note: I am only considering the diagram here "unrealistic" as it may be :p). 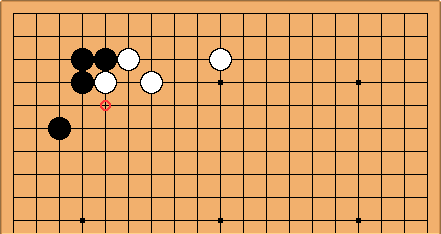 Here both sides are equal in terms of nearby stones [3] and I would judge this to be a position with advantage to whoever has sente with again the marked point being key in any forthcoming battles.

In games the sequence is more likely to be one given by Charles on my previous attempt at a page with hane at the marked point coming before the full triangle. That is, locally Black is likely to be stronger as thick shapes are often a byproduct of invasion (as Black has the corner we can assume that White is invading and trying to play lightly). 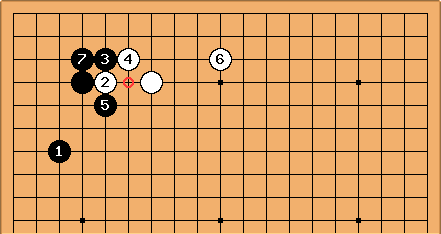 I will point out the this particular position is probably the result of incorrect play by White.

White is leaning against black's shape without strong support in the area leaving her position either thin or being forced into bad shape after a play at the marked point. As Charles pointed out on the LovedInEmerald/How good shape becomes bad shape page this sort of play by White should mostly be used to help out some stones which are greatly in need of it. It looks like that, rather than an "attack" on the corner.

I am trying to adopt an approach used by the great Aaron Nimzowitch (a chess grandmaster) who was famous for his book which attempted to break down chess into simpler forms by analysing artifical endgames to show the relative merits and flaws of the pieces.

Not that I would compare myself to him in chess or go but stealing his type of analysis and trying to apply it to go seems reasonable :p.

To try and give myself (and hopefully others) more of an idea what to look at when drawing out the battle lines. I am going to start with my original example from the other page LovedInEmerald/How good shape becomes bad shape only with a few differences...