Dieter: I suggest: weak and not easily sacrificed.

Bill: I used to think of heavy and light in terms of shape. I came to realize that often it is not the shape that matters, but what you do with it. Now I think that the most important aspect of heaviness and lightness is attitude. :-)

John F: Yes, that's a nice insight, Bill. Regarding the comments above. I disagree completely that thickness can be heavy. A thick group is by definition safe. A heavy group is by definition a burden. I suspect the writer is mixing up thickness and influence. It might be a useful corrective to take Bill's advice to extremes and forget shape altogether.

deft: If you played a stone which was not kikashi, it represents some investment - if you want to give it up you need to make back that investment somehow, but the problem with a heavy group is that you've made a huge investment in something which turned into a weak group of stones. Now you cannot sacrifice it, because you won't be able to make back the investment that the group represents.

Charles Matthews Heavy play usually counts as a mistake. Perhaps the most convincing general reason to play heavily is to save cutting stones, as part of a divide and conquer strategy; in that case the point is that your heaviness is balanced by compensation in the form of your opponent's weak group(s).

victim: I think the main difference between heavy and light is: in a heavy group the stones are solidly connected, while a light group consists of stones that can still be cut. That way you can throw away parts of a light group, but a heavy group can only live or die as a whole.

The words heavy and light apply only to groups in the opponent's sphere of influence.

Charles Matthews: It's an interesting comment, and I can see that it is reasonable debating position. It does however then make me think that sphere of influence doesn't mean quite the same as framework: it should be a broader term.

here is a mistake. After

to attack, you can say that Black has a heavy group.

victim One could argue that the group becomes heavy as soon as White invades and expands the sphere of influence. :)

Even if I make a marvellous wall constituting one border of my moyo, after some invasions and fights that wall may end up a heavy group. I wouldn't call it heavy as long as it's a moyo border.

But I see what you mean. In the case above, heaviness is just one move away even if I use the equivocation in my previous two paragraphs, so everyone would call

The words heavy and light apply only to isolated groups or groups in danger of being isolated.

Charles I think that's probably true. It might be helpful: for example if there is a ko fight happening, the 'danger' can be in unexpected places; and it may be a sensitive comment on the game that one should play more lightly (because some large-scale exchanges can occur). 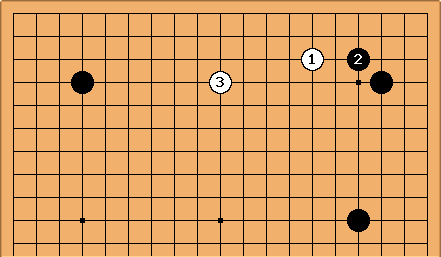 In this kind of case, which is typical of contemporary go, both

are attempts to play lightly.

I feel there may be some aspect of 'contiguity', to add to framework theory, which expresses more clearly this as a concept. It obviously is an advantage to me, if my opponent makes a heavy play on the outer edge of my framework.

Bob McGuigan: This is on a different tack from the discussion above, and it might be more appropriately placed somewhere else. Anyhow, I have often noticed weaker players being confused about the distinction between heavy and thick. I have watched a double-digit kyu game in which a player made a big, heavy group which, in the post-game discussion, was called thick.

Tom: I'm a little suprised that there is confusion about the term 'heavy'. After I had had to carry a heavy group through a game, I found it to be one of the most apt go terms.

AJP: Agree. "heavy" to me is short for "burdensome", and is defined by my attitude alone. If dealing with particular stones of mine is cramping my style for what I want to do with a game, then those stones are heavy, regardless of shape, safety, value etc. It is the term "light" that I find less obvious, except as a not-quite-appropriate opposite for "heavy".