The way to turn a wall or other influential position into a framework is to extend from it along the side. 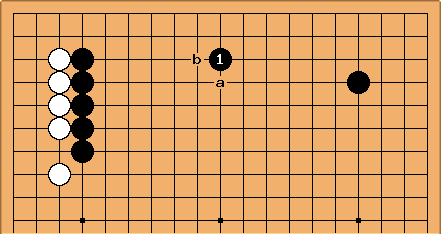 Here for example Black 1 makes very good use of the wall to the left: most of the side is now Black's framework, and if White plays in it Black can attack strongly. Putting it another way, White would be very happy to establish a group just in the same area where Black has played, for example by playing a wedge.

Black 1 could also be at a, with more emphasis on the centre. But at b would be too close to the wall: see extension from a wall for the basic ideas about how far to extend.