Make your move in the SL Vernal Equinox Rengo 2003!

For how it's done, see Ongoing Game. Enjoy!

Why don't we list the players on each side and their strengths? 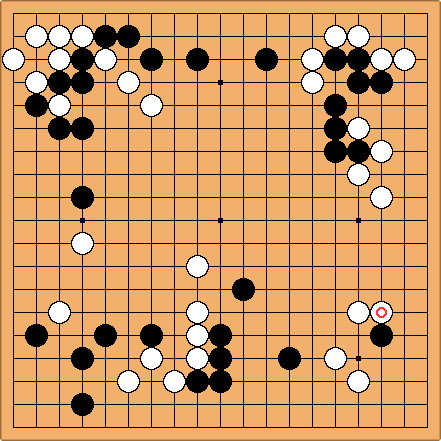 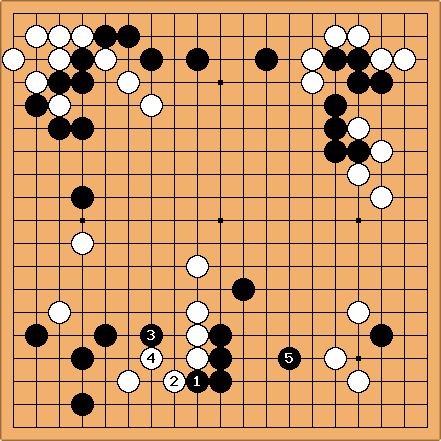 actually looks like a aji-keshi move.w seems very solid after the exchange of

. So I decide to fix b shape first with

: Trying to be patient and stopping my hand from playing fancy, aji-keshi moves to keep Black from cutting...
BTW, welcome back to played Go after so much blabla ;-)))
Isn't about time to finish the Black Sheep Rengo 2003 and get ready for the 2004 Peace Rainbow Rengo??

. Slow or vital point? Charles Where I would have played, anyway. Mutual base point. 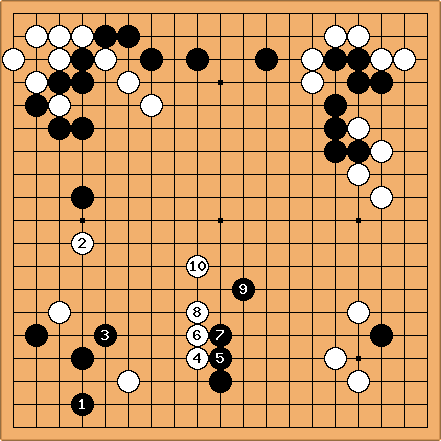 . The march to the center continues.

: The game is very much in Black's favour. But since someone wants to revive the game, I'll just carry on.

Jesse: Don't feel compelled to play on my account. If there was a good reason to abandon the game, that's fine. I just like to see a rengo game going since I think they're fun to follow and a great source of discussion.

: basic instinct, hopefully not disgustingly. This game seems interesting and far from played out, so I thought I'd join to get things going again.

: disgustingly reckless, but nobody played in the last month and half... 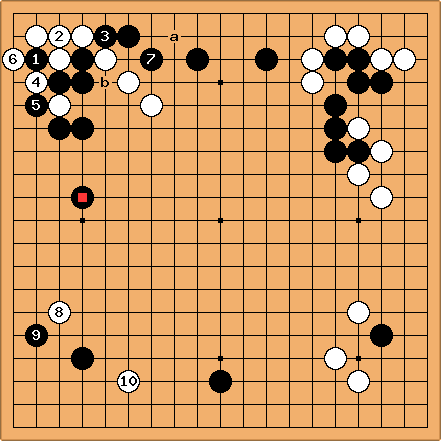 : Nobody plays, so I have decided to take full responsibility for my recklessness...
Ishida says that

is a greedy move: to me it has always looked as a grabbing-lots-of-point move. Let's what happens.

Charles Here the point of

is mostly to steal the base of

. This is the way to use

, to attack. I have created a page side pattern from VER 2003, to discuss the lower side as it was before

. Go criticize me all you want, because I really don't know how to play.

. About the "What else?": I was wondering about White at a both for

unkx80: I did consider a. My intention is to play

before playing a, so that it may be possible to play the atari at b when the need arises. However I did not want to make two moves in a row.

: What else?
Still, I'd like to go back a little... If, still ashamed for my poor play, I am entitled a little discussion about W40... 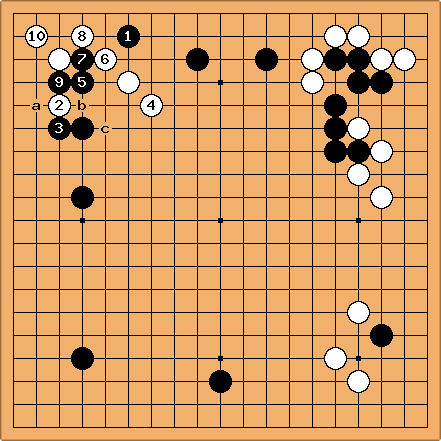 (Black 37): I suspect it might be time for tenuki, but since white can't fail to reply to this...

(White 36): Ten days went by since Black's last move here... I feel like the Snow Team is disgusted with my mistake and doesn't want to play anymore. Therefore, spreading me head with ashes, I'll try to salvage something, just hoping not to make things even worse...

(White 34): Oh Shape! Thou art my weakest point%%% I've played this way because I want a way out, because playing a feels submissive to me, and because playing b could provoke Black c and I didn't like this either...
And... I like a team of loudmouths!

(Black 31). Strengthen one group might be the responsible thing. 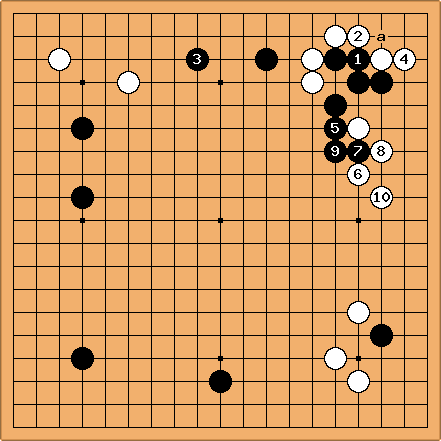 . These two white stones cannot be attacked anyway, so we may as well strengthen them.

Charles: Black 25. Suddenly Black has a bad position. Dieter: No need to hammer it home. Keep it rengo. Charles Keep it wiki is a good idea, too.

is almost certainly a mistake. It should have been at a.

(Black 23): I think the black group in the UR will live now, so let's establish a base on the upper side (and threaten to slide into the UL corner, so this is hopefully sente).

HolIgor: Interesting. I would definitely play

could be at a as well.

Charles Black isn't in trouble there? We are still in joseki, according to Yi Ch'ang-ho and Yamashita Keigo. To put it another way, eye space in the corner is important for Black. 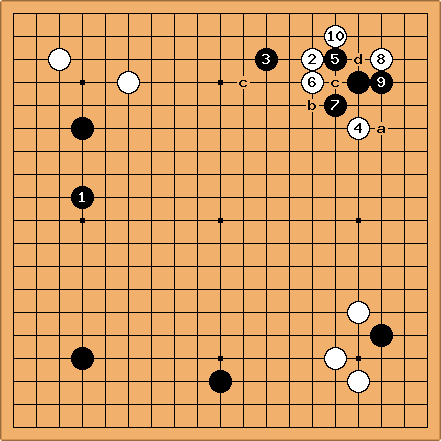 (White 20): Well, nobody's playing and this move is a consequence of my previous one, so I think it's OK to play twice and keep things going.
From Charles' analysis I've understood that playing to make ko was sort of premature, and that

would have been hurt more than in this variation.
Am I correct? Charles I think

are a reasonable direction of play.

(Black 19): this looks like the right side to press from: d is bad shape. Expanding on DJ's comment, it's good to have people a whole 15 stones stronger to clean up after me ;-)

(White 18): Probe! Probe%%% I adore Rengo's! If you make mistakes, there's always a stronger player ready to correct you...

(Black 17): Seems the only move. Looks very ko-ish, and I don't know where we are heading...but I am certainly delighted to play a difficult ko being on the same side as the

expert on that matter :-) Charles I disclaim expertise, but I'd welcome a ko fight. Still, I don't see one in this joseki after

as played. If that had been at c, sure.

Dave Interesting! I have never encountered this before. It seems to me that with support along both the top and the right, White should not back down here. Hence

(Black 15) No need to play the most ordinary joseki here.

): I agree that the RS looks important for white. I didn't like the result of a white invasion in SanSan, nor of W b, B at

, W c.
The only other interesting option the came to my mind was the following:

But the risk is that it would help Black to develop down the right side...

). Charles I prefer at a, to play steadily on this side where White may become strong. dnerra Interesting. I thought the upper side was more important than the right side, so a felt like giving in.

). A strong left side. Charles This is the correct direction. But one more line for a three-space extension is important in relation with the lower left corner. 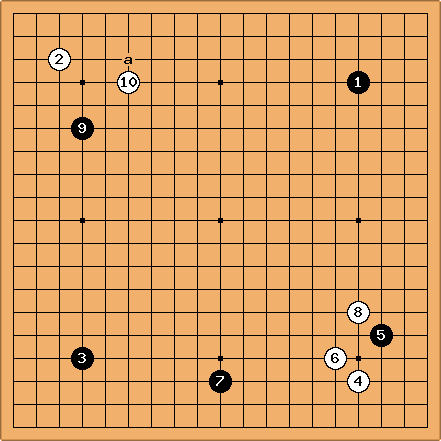 is just normal. You were considering a pincer? Dave Perhaps balanced would be a better term. I think a leaves the top played out for the moment while

leaves approaching the upper right or attacking on the left side as miai.

Question: is this overconcentrated? Or does it just come out to two net moves to secure a corner, so it's like shimari? - Migeru

. White is willing to treat the right and the bottom as miai. Charles

played low is to initiate a counter-pincer plan if White plays a two-space or three-space pincer. Now we'll have something different.

. Here there is a reason to approach low.

: Territory vs. Influence, here we go!

: I usually try to play sanrensei, but this is supposed to be a learning experience, so let's take opposite corners.