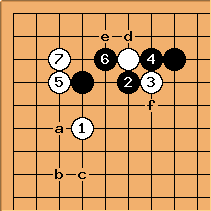 The high double kakari of

is played less often than the low one of White a. It also has fewer variations; rarely is anything played except the sequence to

The quiet exchange of

is again joseki (see below for Black resists). Compared to the position with

at a, the left side is more important. Black has interesting follow-up moves at b and c, places he would not dream of playing if White had the solid position with

After black tenuki, the exchange of white d for black e is large, especially if the ladder at f favors white. 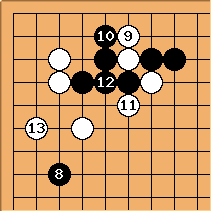 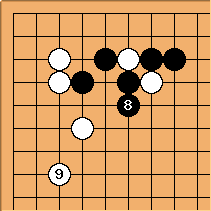 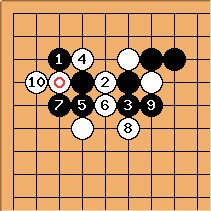 The great advantage for White of the high double kakari, is that Black can't now try to resist by playing

here. White can march right through Black's position with