), put on the spot right away by Charles's 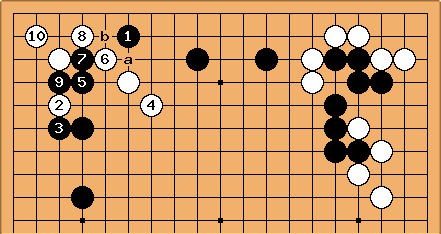 I didn't know what to do to salvage the situation, and after much rumination I played

(I also considered a play at a).
My idea was the sequence above, which actually happened. But then I wanted to play

) at b. The idea was to cede Black the corner with some aji left, and to weaken greatly the black group on the top side.
Something like the sequence below: 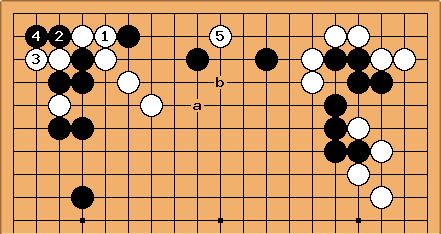 What do the stronger players think? Would this line of play (remember, it is a recovery from a previous bad move...) be feasible?

Another point: if White can in this way get the black top side group on the run, could it be possible to engineer a splitting attack with the black group in the upper right?

dnerra: I think this is a worthwile alternative. First, let's have a look at the aji: 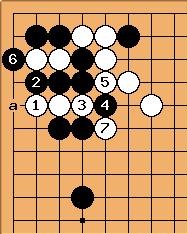 (Now Black can connect at a - otherwise, he shouldn't play at

.) This means that the corner is not as big as it looks.

The problem with your sequence is that the white group is weak, too. Hence the deep attack at

looks a bit too hasty to me. I prefer trying to gain strength with 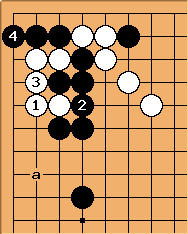 unkx80: Surely you will need to quantify the aji with an extra white stone in the region of a, else the result is shortage of liberties.

dnerra: Thx, I had overlooked the descent tesuji at

DJ: Of course I didn't mean to exploit the aji right away. But Black should be careful about the appearance of white stones where unkx80 indicated. I believe also that the eji? could be useful for the yose.

unkx80: Back to the real topic. In your diagram "VER, My idea" above, I also say that

is not a very good move. 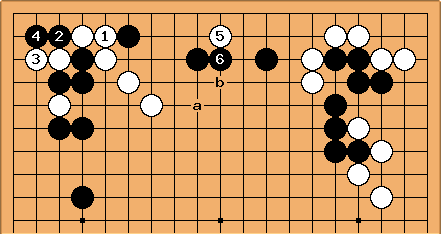 My question is, how would you respond to a simple and natural move like

DJ: Uh, I'm just a 3k groping in the dark... As Dnerra said, White's upper left group is still weak, and a and b would be sensible alternatives with respect to

above.
But what if White plays as below (

exchanged)? Would it be impossible? 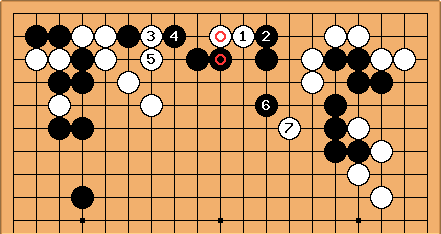 unkx80: White has sacrificed an entire corner to get a few points on the upper side, is this result satisfactory? But I might play