A possible reasoning behind a few of the above is a generic long cycle rule. The following variants have also been used in theoretical discussions: 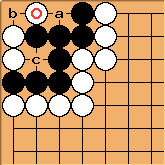