A quadruple ko is similar to triple ko, except that a quadruple ko involves four kos on the board that are all in play at the same time.

This page is about the fight that can follow in such a situation.

In real games the result of this fight depends on which rules are followed especially the superko rule.

This is therefore also an investigation in superko rules. my idea was to find the longest fight that can happen in this position, not so much to find out who wins or loses.

Feel free to add variations only if they are longer than the longest found allready. And do add comments about moves that are illegal. But do start with the same 2 first moves.

The motivation for the natural situational superko rule is that this variation of superko rule allows (in theory at least) the longest fight. And therefore other superko rules can be put in the comments.

The motivation for ending the game with three instead of two passes is that the first pass of an player can be because it is illegal (under the normal ko rule) to recapture a position and having the game end after only two passes prohibitits this player from retaking the last ko. while this maybe was valid move.

Please add comments on the above here.

willemien: Can you give a link?

Bill: The defense of the mutual standoff position of a quadruple ko is simple. When the opponent takes a ko, threatening to capture, do not take back in that ko mouth, but respond with a triple ko in the other three. That will be an effective defense under nearly all superko rules in use today. 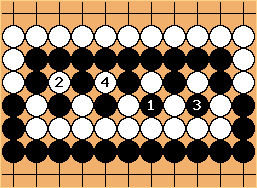 When Black attacks with

, White avoids taking it back. 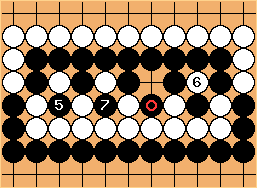 returns to a balanced position. Now

is prohibited, because it repeats the position after 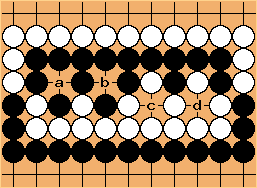 This is the startposition and it is Blacks turn to play.

The board outside the part in startposition is unchangable (so no tenuki's or ko threats and the surrounding stones are alive.

one to change (make a copy