The "Active Superko" rule is a particular superko rule which, in combination with permitted self-capture, formally allows to get rid of "forbidden points" alltogether:

A player who plays the same turn in the same position again as s/he has already before, wins the game immediately.[1],[2].

Note: Although a "turn" usually changes the board position, it doesn't have to. That is, since active superko is applied to turns rather than moves, a player can also win by passing again in a situation he has already passed in before.

Amongst the known superko rules this probably is the least restrictive one, with most surprising results. To my knowledge, it is not currently used in any popular ruleset, though. --blubb

Of course, the point of an active superko fight is to prevent the opponent from playing such an ultimate winning move.

At first glance, it may feel odd to win a game by a single move regardless of what would be the score. However in fact, that's just the counterpart to losing a game by forfeit due to a forbidden move, under rules which treat certain moves as illegal. 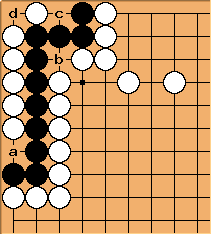 Here, Black can live safely by playing at a and subsequently capturing the five white stones. If it's White turn though, White can kill the corner "almost-safely", similarly to what happens to bent four under one of the common superko rules. To do so, White first has to take away Black's last outside liberty b. Later on, as far as possible, White removes all superko threats from the board, followed by playing c. Black should not capture c now, because, after White in turn captures black d, White might play c again and thereby, win the entire game.

On the other hand, if White cannot afford to remove all superko threats, e. g. when there is a big seki somewhere else on the board, White may decide not to touch this corner after b anymore and let it be seki. Otherwise, Black can make use of the threat immediately after white c. If White responds, Black captures the two c stones. In case White also can find a superko threat now, e. g. as follow-up to Black's threat, it's time to play it. Then, by White subsequently capturing d, a new superko cycle is entered. But if White cannot find a superko threat, White has to capture d immediately (which leads back to the initial local position, when b was taken). In that case, White should not approach at c again, because Black then could win the entire game at d.[4]