(There is a discussion section at the bottom: please comment there. Thanks in advance!)

Strategic difference between PSK and SSK

A board position is given by a function from the set of 19*19 intersections to the set {empty, black, white}. A situation is given by a board position plus the turn (Black or White). The Superko rule has two main variants, which we repeat for clarity: Positional Superko (or PSK) stipulates that a placement (or board play) must lead to a new board position (otherwise its not allowed); and Situational Superko (or SSK) stipulates that a placement must lead to a new situation. Clearly any placement forbidden by SSK is also forbidden by PSK, while the converse is not true. Note that any placement allowed by SSK but not by PSK (call it a controversial placement) is the last move in a cycle of odd length leading from some board position to itself. Assuming were at the endgame, and no dead stones on the board are currently disputed, it would seem the player who made the above controversial placement could have passed instead of beginning the odd cycle, achieving similar results. Alternately her opponent can pass after the odd cycle, leading to the situation right before the odd cycle began, so again its not clear what was gained by that controversial move.

The following is therefore a natural question: is there a strategic difference between the above two variants of Superko?

More precisely: assume players agreed to play with Superko, but neglected to agree on which of the above variants is meant (assume they had agreed on all other rules). Assume further that one player thought the relevant variant was PSK, while her opponent thought it was SSK. Can there be a point in the game where each player is rightly wondering: why isnt my opponent resigning? Im clearly winning!. Also in our hypothetical example each player wouldnt have thought her opponents recent moves are gross mistakes.

We want to exclude trivial examples like the following: the SSK-player is leading (and can even afford to pass), but began an odd cycle (e.g. give-2-take-1) where all moves in the cycle except the last are sente, and such that she loses the game if she cant complete the cycle. Then when shes about to take back one prisoner the PSK-player claims its not allowed. Indeed, the give-2 move of the SSK-player would be deemed a gross mistake by the PSK-player, but we wish to be more precise in why we exclude this example.

We therefore demand that in our hypothetical example all Superko issues are relevant only from that point in the game onwards, meaning all board positions after that point cannot equal board positions before that point (consequently the same is true for situations). For example, a stone had just been played on an intersection that stood empty till then, and that stone is part of a large, unconditionally alive group. 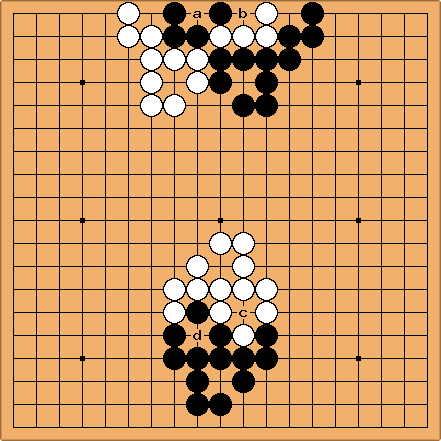 We show that there are games with a real strategic difference between Positional Superko and Situational Superko. This example does not involve a very tight victory (either way), and does not depend on niceties in other rules (e.g. whether a pass stone should be given, whether a certain player must be the last to play, etc.), so it seems to be relevant for practically any ruleset in which both variants make sense.

In the diagram assume we're at the end of the endgame, White's territory is larger than Black's by ~10 points, and players have an equal number of prisoners. It is Black's turn, and we assume Whites last move was at an intersection that stood empty till then, and her stone is part of a large unconditionally alive group (so Superko issues are relevant only from here on). Finally assume there are no Ko threats (aside from those shown). Note that Black seems to only have one move at a, after which the situation there becomes Seki. Indeed, for Positional Superko this is the case, as is not very hard to verify, so White has an easy victory.

However, if we add two assumptions and change to Situational Superko, we have a win for Black. We assume: (i) Black capturing Whites top group is very big (i.e. that group is larger than shown in the diagram), so that even if White wins the eternal Ko Black gains ~25 points (and wins). We also assume: (ii) Black winning the eternal Ko is bigger than shown, so that even if White captures her top group Black still gains ~25 points. These two assumptions do not change the result under the PSK variant, of course. For concreteness sake you can find a detailed position satisfying the assumptions here: Superko distinction detailed example.

We now show how Black can force a win: we give Blacks correct moves (some are forced), and Whites forced moves (relying on the assumptions we made). When White can play elsewhere this is not shown - it just delays her loss (by either 4 or 6 moves), as is easy to verify.

The continuation in both cases is the same:

The last move by White is forced (by assumption (ii), as indicated), but actually its not allowed (by SSK), since this situation was already created earlier (by Whites first placement in the example). Therefore Black wins by ~15 points.

Note that the situation B3bw that White was forbidden to repeat was created earlier by a placement, therefore the example is also relevant to natural SSK. 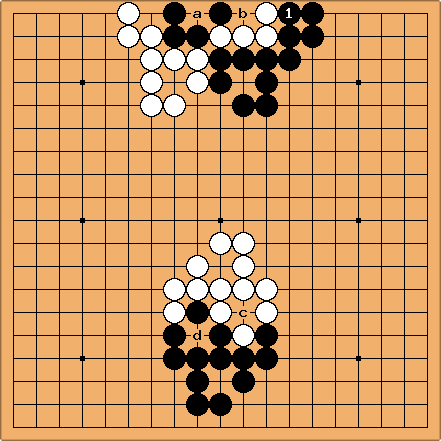 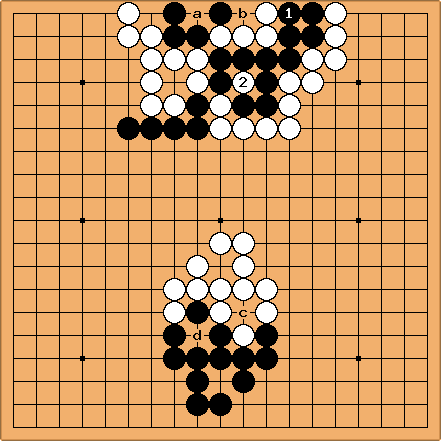