A cycle is a non-empty move sequence that starts and ends with the same position.[1] this may also be called a positional cycle to avoid misunderstandings. If at the end of the cycle it is the same players turn as at the start, it is also a situational cycle (repeats the same situation). If cycles are allowed without restrictions, it is possible for a game to go on indefinitely.

Although it is easy to play cycles if both players cooperate in creating them, such cycles are uninteresting, because it will be to the benefit of one of the players to break the cycle and play elsewhere.

Of more interest are cycles that can be forced by one player: allowing such cycles could enable a player who is behind to prevent a loss by forcing the game to continue indefinitely. Most such cycles are rare, and the only one that is seen regularly in actual play is the basic ko.

If multiple cycles occur on the board simultaneously, they may interact and combine to form a longer cycle, as in triple ko.

Cycles in the rules

All rule sets prohibit repeating the position in a basic ko, and the Chinese superko rule also forbids repetitions by means of sending two, returning one, but not all rule sets all prohibit longer cycles, such as triple ko, eternal life or round-robin ko. This is probably because they are so rare that they were never considered [3]. In rule sets that allow them, a game in which they occur is usually declared "no result", which is sometimes ruled as jigo (tie), and sometimes replayed.

Cycles classified by number of moves

The 1-board-move cycle is mainly a theoretical construct, as it is illegal in most rule sets.

A single-stone suicide is the only possible type of one-move cycle apart from a pass. It is only legal in rule sets that allow suicide and do not use positional superko; even then the only possible point of it is to pass without allowing ones opponent to end the game immediately. It costs one point under territory but not area scoring and loses sente.

Two successive passes form a 2-move situational cycle, if move in the definition is taken to mean turn rather than board play. If we allow multiple moves by one player, another possibility is suicide of two stones.

The only other possible type of two-move cycle is the basic ko, which is also the only cycle to occur commonly in actual play and is prohibited under all rule sets. Cycles longer than this are usually called long cycles

This is the only possible type of two-board-move cycle, since the second stone must capture the first in order to recreate the original position.

The sending two, returning one sequence is an example of a three-move cycle. Under territory scoring rules, this sequence constitutes a loss for White, as she has give two prisoners to Blacks one. Under area scoring, it does not constitute such a loss, but still loses sente.

If positional superko is used,

is prohibited. This is intentional, but not ideal: in exceptional circumstances, positional (as well as situational) superko can lead to counter-intuitive results. See Rules Beast 1 for a case where both superko rules surprisingly force a connection in a seki to avoid a capture; RPs Cycle Completion proposes a remedy.

Under rules that use area scoring without banning long cycles, this pattern would allow White to force an endless game unless Black can afford a local loss (in the above case, by ignoring

and allowing White to capture, turning the seki into a live white group and losing Black 6 points). Under territory scoring rules, this is not the case, as each repetition of the cycle gains Black one point. Black can play through the cycle a few times until he has gained enough to compensate for the local loss.

The sequence known as eternal life constitutes a four-move cycle.

If either positional or situational superko is used,

is prohibited in the above sequence. Under basic ko rules, this cycle could repeat indefinitely. 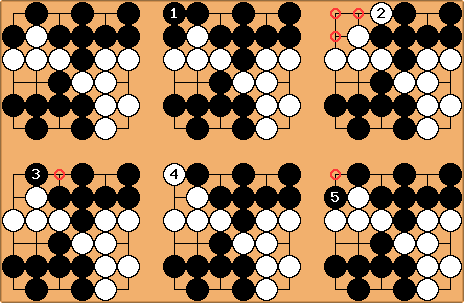 This sequence, known as sending three, returning two, shows a five-move cycle. As with all cycles that have an odd number of moves, this sequence loses sente. Unlike the sending two, returning one scenario however,

is mandatory for Black as the only way to avoid losing his group. 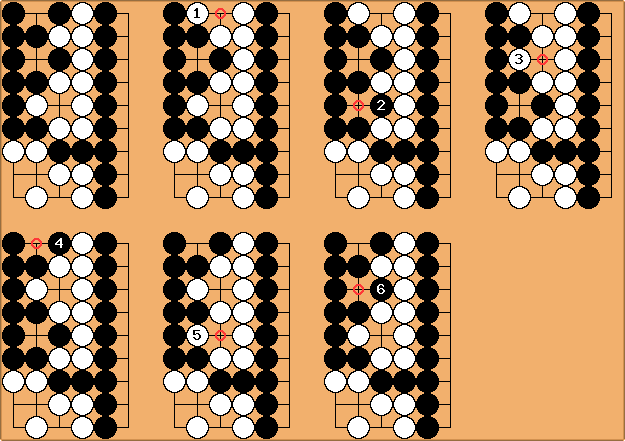 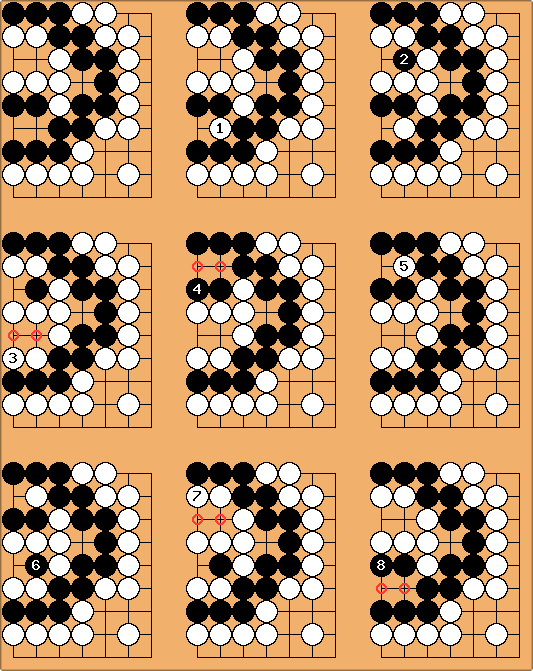 The triple ko stones cycle (not the same as triple ko) constitutes a ten-move cycle. Mentioned at 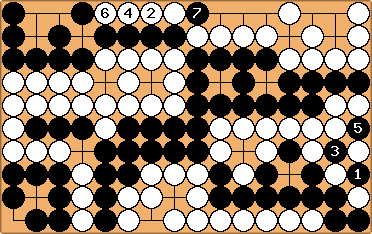 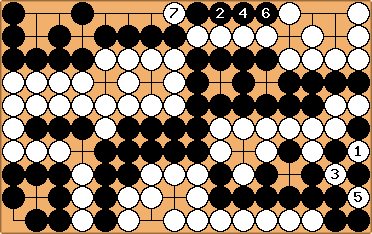 This quadruple ko stones cycle (not the same as quadruple ko) is a fourteen-move cycle. It was discovered by Matti Siivola. Mentioned at

In CGT we analyse local positions separately as abstract games and then analyse how they may be combined into a sum of games. When considering cycles some issues arise:

[1]: Robert Pauli disagrees, maintaining that all cycles are of even length and may include passes. He proposed to replace this page with the one at Cycle / Alternative definition by Robert Pauli.

This proposal received no support, and was contested by Herman Hiddema, Robert Jasiek, Bill and fractic.

For the discussion surrounding this issue, see /Discussion#cyclelength

Please keep any discussion here short; longer and older discussions can be found at /Discussion.

[2] Robert Pauli: Since the page authors

the definition IMHO should be augmented with

A move can be a board play or a pass, however, the cycle length only counts the board plays and every cycle at least has to use one.

This is my best guess. Should it be wrong, I humbly ask for a correction.

fractic: Robert, you keep insisting on a single unifying definition. The definition you gave above is perfectly workable if you are writing something that requires a very precise definition. But that is not what this page is. It describes the term generally not specifically (Patrick Traill did a great job highlighting this with his latest edit). And as a result the definition is somewhat ambiguous. But this is a good thing, it makes the page inclusive of different uses of the term.

So since you ask for a correction, I shall try. There is nothing wrong with the meaning of your definition. The error is in that that definition is suitable for a mathematical paper, not a general wiki page.

[3] jann: This seems incorrect since famous triple ko games were well known throughout history. A more plausible explanation is "don't fix what is not broken".