blubb: Has anyone thought or heard of

Colorblind Superko
Every whole-board pattern of empty points is allowed to occur at most once in a game.

Obviously, it works even simpler than positional superko. I find it interesting for go between more than two colors.

W: I use this in my go AI, since my board implementation is suitable for calculating a hash for this quickly, and adding colour information would make it significantly slower. I think the chance of a situation repeating but with some colours reversed is fairly negligible.

swooboo: Can someone give some thought of Colorblind Superko being identical to the regular superko? I have a feeling that it is very similar, but I think there is a possibility that the pattern of empty points could repeat with some stones of reversed color. I have tried to find something, but nothing so far. Also, proving that this is equal to the superko should be even harder, I think.

fractic: This is stronger then normal superko. Here is an example.

under a colourblind super ko. Not that it would be a meaningfull move. 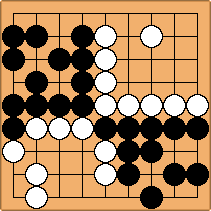 fractic: Here's a simple problem. Using area scoring what's the best that black can get? There is no komi.

swooboo: I didn't really get this one, but thanks for the counter example! It does seem that that is not enough as a counter example, but it shows us that the rule is not equal to the regular superko.