Another Superko puzzle. (this is copied from the two eyes can die page)

As an aside to the discussion above, there are some situations involving superko where two-eyed groups may be sacrificed. 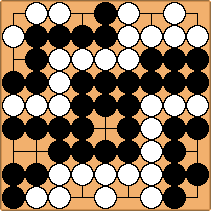 In this position white can use the sending two returning one to create a superko problem for black. 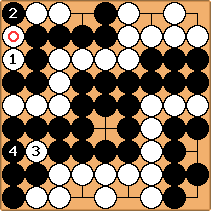 Should black be naive: After playing through the cycle once black cannot capture again after

. After black passes again, white will capture the upper left group, winning the game. In order to win, black must give up a different two-eyed group. 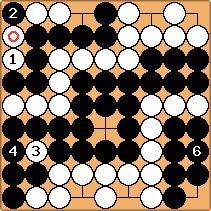 the lower right group is dead, but black will have no more restrictions from superko and will win the game 41 to 40.

RobertJasiek: Presumably Francois Lorraine discovered the eye filling tesuji first for a position with a 1-eye-flaw. In general such positions are extremely rare on the 19x19 (fewer than 1 in 10 million games?) because they require non-existence of ordinary tenukis in territory. For small boards, the probability is a bit higher.

Bill: Back to the drawing board, I think. 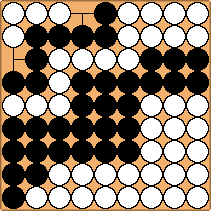