At many places there are discussions about what is the best (whatever "best" may mean) superko rule? is.

This page is to give both of the sides ammunition for their discussions.

Please add only objective reasons pro or against the superko rules. And only add positive statements (it is a bit double up to add the advantages othe why or why nots to the appropriate section.

And please keep one-liners to one liners. 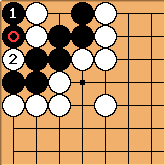 A simple situation where a positional superko appears is the Sending two, returning one postition. (

Under area rules Black doesn't lose any points by playing this way (prisoners have no value in area counting, so Black can , if there is no superko rule continue the game forever. Notice that after

it is White's move, under positional superko this doesn't matter.

With the normal situational superko rule this position is lost for White. I, anonymous, did not believe it a first but here is the explanation.

is under the situational superko rule allowed, it recreates the starting position but now it is White's move. But after

White is not allowed to pass, because that would recreate the starting position with Black to move.

Bill: Anonymous has misunderstood the rule. Pass is legal for White. Then it is Black who is prevented from playing

So White has to play one of the points a, but whichever she plays she is in atari and so Black can capture her group by playing on the other a.

Erik: Nonsense; following that line of reasoning pass would *always* be illegal under positional superko. However, pass is always legal (and generally not even considered to be a 'move').

willemien I am not sure but i think that under the natural situational superko rule White is allowed to pass. (pass moves may recreate a position) but Black is not allowed to play

3. Other forms of superko-like rules

Erik: The reader should be warned that the usual positional vs situational debate is a red herring. It diverts attention from the fact that both superko rules fail to distinguish between repetitions that cause infinite games and repetitions that may occur once without preventing a normal game end.

RobertJasiek: Erik, define that distinction! It is an advanced open research topic.

Erik: Robert, I don't see why I should define a distinction to point out that these superko rules make no distinction. But ok, here's my take on it: Any true cycle containing a pass can, with proper rules, be brought to a normal game end. As far as I can see the only challenge is with cycles where (1) neither side passes, and (2) it can be shown that one side had the option to pass but decided to start the cycle instead (and thus became responsible for attempting to force an infinite game).

Bill: "Any true cycle containing a pass can, with proper rules, be brought to a normal game end." AFAIK, I am the only one to formulate such "proper" rules, although Ing came close. OC, there is the question of what a "normal" game end is. ;)

RobertJasiek: Erik, such a definition is necessary to criticise superko for something that other rules do not need to be criticised for. However, AFAIK all(!) ko rules(ets) so far do not(!) make that distinction. Nor do Spight Rules, which restrict in specifically related manner but do not prevent cycles of either of two types proclaimed by Erik. In particular, basic ko rule + long cycle tie rule or basic ko rule + Long Cycle Rules do not(!) prevent "stupid" cycles from occurring! So they are not any better than superko with respect to this aspect. - Erik, "true cycle" is undefined. "proper rules" is undefined. "normal game end" is undefined. So you do not offer a definition for the distinction, of course. The methods of [2] come the closest. Bill's contibution is noteworthy as well but (judging on the rules level) more for potentially useful rules than for a distinction between cycles "worth playing" and cycles "not worth playing". Erik, to show (2), one needs to proceed with the research in Types of Basic Kos by generalizing it to also include ko strings of arbitrary size. Note in particular the dependency on the whole game tree by means of force and virtual-force. Only afterwards we would be able to create ko rulesets that always make the distinction. - Bill, Ing did not come close, see the aforementioned paper. He merely gave the first ideas of how to proceed with study.

Erik: Robert, of course I do not provide definitions for every word I write. It is difficult for me to imagine how an expert like you could fail to understand the meaning of what I wrote, but if that's the case then so be it.

Luiz: Am I the only one here who thinks that what Erik said at first doesn't make any sense? ANY repetition of the game board is differentiated just by who will play next, black or white. Give me ONE example of a repetition that may occur ONCE with the same player to play without being able to repetead ad nauseum. If you can provide that, then you can prove your theorem that there are a distinction between the repetitions as you claimed above. Situational SuperKo permits that a given position happens twice on the board (one for each player), Positional SuperKo doesn't even permit that, so it might be said that it removes a bit from the game, as an opportunity is removed (but I still vow for PSK for being simpler), also, it can be seen as this opportunity have a more strategic value, since players know that it can happen only once.