The Long Cycle Seki Rule is a rule to handle long cycles, such as triple ko, eternal life, or other similar cycles. As such it is an alternative to super ko, the long cycle rule, the short cycle rule?, the ing ko rule, etc.

If a cycle longer than two moves occurs, all cycle intersections are cleared and both players are prohibited from playing on them again for the rest of the game

Here a cycle is defined as a sequence of moves that starts and ends in the same position, and the cycle intersections are those intersections that are played on during the cycle.

Because the cycle intersections are prohibited, any chains adjacent to them are uncapturable for the remainder of the game, and are thus effectively in a status similar to seki, which is where this rule gets its name. 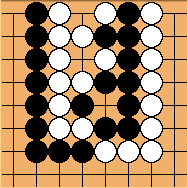 If the players play through the triple ko cycle, which consists of six moves, then the long cycle seki rule takes effect. 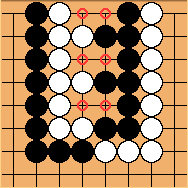 marked intersections have been cleared, and are prohibited for both players.

If the players play through the eternal life cycle, which consists of four moves, then the long cycle seki rule takes effect.

marked intersections have been cleared, and are prohibited for both players.

(Note that if white plays a, he cannot thereafter capture the single black stone, because that intersection is prohibited)