The current rules of the Korean Baduk Association are the

Korean rules are similar to the Japanese rules. Both use TerritoryScoring, but different methods for judging end positions.

Santo?: Is it really the case? The cited rules-text in English only says that "positions' life and dead status is judged locally, without regarding other areas of the board", but makes no mention of ko rules or local-shape-precedents, so maybe "local-moonshine-life is still considered dead locally" is a local, non-written determination. Where is the source for this "only local play without special ko rules"?

jann: Examples of local moonshine are shown in both the 2016 version (linked above) and the 2013 version (linked at the bottom) of the text. It is not dead, the rules consider it alive, with the consequential one-sided draw on repetition option. The declaration that hypothetical play is local is present in the 2013 version. Korean rules are somewhat related to pre-1989 Japanese rules, before the invention of special ko rules and the return to global hypothetical play.

Santo?: Sorry but in the 2016 version, it is only mentioned in the "draw by repetition" section, not as life and death. That is, the rules say that IF a repetition IS PLAYED in the board, then the game stops with a draw. I could not find where they say that, if that position is left at the end, then moonshine life is alive. The 2013 text is slightly suggestive of that, because it says "Black has an option of ending the game in a draw.". This suggest, but I am guessing what the writer meant, that black CAN FORCE the draw and that MIGHT MAKE SENSE STRATEGICALLY (if the moonshine life were considered dead if left there, then it would never make sense strategically to go for the infinite repetition, as black would in fact be fighting to remove from the board an already dead group). So, I still wish the text would have been written much more clearly, but at least that 2013 phrasing is quite suggestive of this local-moonshine-lives interpretation :)

Santo?: I see no mention to "enabling new stones". How is this seki solved under these rules?

https://senseis.xmp.net/?SekiWithEyesQuestion6. Following what is written, "All uncapturable stones are alive and all capturable stones are dead.", that position would have white alive and black death, so to avoid letting white have many points, black would be forced to add a prisoner and give white an extra point by throwing-in with say 1-4. Is this really the case? Or is this local shape judged as seki for whatever reason, even if it is not clearly explained? I find it unlikely that modern Korean professionals play this with a one-point-difference compared to Japanese rules, but maybe it really is so.

jann: I don't think "all capturable stones are dead" can be taken literally (nakade, snapback etc.) but the exact details are not defined.

Santo?: I see. Thus, inferring from these written rules that "local moonshine life is deemed alive" seems like quite a stretch, when so many details of what exactly is "local play shapes that cannot be captured" are left unspecified. An authoritative precedent (A statement from the 2016 rule's authors? Or maybe a professional tournament ruling under these rules? But moonshine life is so rare, we might have to wait a lot for that to happen...) would settle whether these 2016 rules indeed change local moonshine life, or whether these rules end up meaning "like Japanese, but we won't bother to actually write down the details".

jann: Since local moonshine is shown as explicit example, it's handling seems clear (it couldn't force repetition if one side would be dead).

Santo?: I might very well be misreading or entirely missing something, see the above comment where I say "Sorry but in the 2016 version, it is only mentioned in the "draw by repetition" section, not as life and death. [...]". I could not find an explicit example where it says that it dies, only that the game will be drawn if the repetition is played. Could you point to such example?

jann: I meant that since it is shown as a valid, meaningful example of one-sided repetition (thus it's alive). If it would be dead its owner would not need to add further dead stones to an already dead group, and "animating dead stones" would not form a meaningful repetition.

Santo?: The cited rules are very ambiguous about how hypothetical plays settles disputes. For example, how exactly does hypothetical play (ko rule does not matter for this example) settle that the two black stones are alive in

https://senseis.xmp.net/?SekiWithEyesQuestion6 ? (Making it all a seki as is). I pretty sure that even in 2016 Korean rules that would be ruled a seki, but unlike the Japanese text, no mention to "enabling" new stones is made in the cited text, so by hypothetical play white can capture them, while black cannot force to capture white. Which makes me think that, unless there is another more complete authoritative text, that cited text actually means "life and dead is judged by shape locally, and according to (implicit) historical precedents and common practice"

Robert Jasiek compares the two in detail at

More important, IMO (a lowly 3dan), some explanations seem plainly wrong - at least food for Robert Jasiek. Most probably Robert will have discussed that one already

http://english.dashn.com/english/korea_baduk/koreabaduk_05_08.htm reading: "In Figure 3-2 White 1 should be sufficient to capture all the Black stones. If white has clearly more Paegam no further move is need. " while the figure shows a mannen ko. There are many more examples which I do not understand.

Besides an improvement of the English seems necessary. Who would like to participate in the job? The website gives a telephone no. First one should phone and ask whether they appreciate any improvement at all and ask about the - several - rule inclarities (could derive from a Korean to English translation as well).

There is an old Korean variant of go called Sunjang Baduk. This has very different rules.

iopq: I guess under Korean rules, ko fights where one side has obviously more ko threats are not necessary - which under territory counting means you can leave a ko unresolved because you have more ko threats. That means an additional point of territory for the person who doesn't need to play. 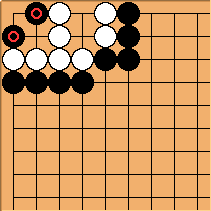 iopq: According to the diagrams on the site, the two Black stones are alive! I guess it would take playing two white stones to kill them, but isn't that counter-intuitive?

Bildstein: But to capture them, White must give up two of his stones.

iopq: Oh, I get it now, thanks. Although wouldn't you prefer to play the sequence out? Then you get a small ko threat and eliminate one.

Bildstein: No, I don't think so. As it stands, Black has one point and White two (which won't change if Black throws in to make a seki, because White will get a prisoner). If White plays and captures, White ends up with four point in the corner (two territory and two prisoners), but Black ends up capturing two stones and getting two points of territory also, so the net result is that White loses the one point local lead that he had.

Harleqin: I don't know. Do Korean rules count points in seki? Japanese do not.

jms: I'm not sure if Korean rules count points in seki, but if they do, then it amounts to the same thing. If black forces a seki, then its one point to white from the capture, but if white plays it out, its 4 points each (as previously shown) and therefore even, so white loses a point by playing it out. ... If neither player moves and the game ends, how do you score it? As seki?

Bill: Korean rules do not count points in seki.

Owen- I'd probably be willing to help with editing an english copy of the rules if needed, although I don't know Korean. In any case, the link posted doesn't seem to lead anywhere.

Jaeup: Here is a Korean version I found. (Though I guess not many people here can read it.) 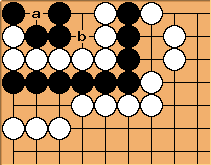 Regarding Figure 3-2, it is a thousand year ko, but the surrounding black stones are not alive. If black is not willing to compete for the ko, white plays a, and the game stops. (The rulebook tries to emphasize that white cannot finish the game without taking the ko.)

In the Japanese rule, two passes occur at this shape, all the black stones are dead, and there is a one point difference from the Korean rule.

Black's correct strategy is to play b so that white must play a, then pass. White must make one more move to end the game safely. i.e. only if you know how to play correctly, the two rules make no difference in this case. (It is not always true. There are a few cases the two rules produce different results.)

Jaeup: Since 1992, the Korean Baduk Association revised the rules a few times. It is quite weird to say this, but I read a Ph.D thesis saying that the most recent changes are never announced. (link to the Ph.D thesis:

Here is a link of the 2009 version Korean Baduk Rule written in Korean.

I believe one can regard that this version includes all the modern ideas of the Korean rule, and changes made afterwards are just rewording the existing rules and adding examples. I cannot make a thorough check of the Asian Game 2013 rule linked below, but a quick glance suggests that it is practically equivalent to the current Korean rule (and it's written in English!).

The major idea? It declares that life and death after the end of the game must be judged locally, though, not surprisingly, it does not clearly define what "local" means. Even if one has infinite ko threats like double ko seki, you cannot use it for disputes in the other parts. (i.e. Isolated bent-four-in-the-corner is always dead because of the lack of local ko threats.)

One consequence of the new rule is that localized moonshine life does not die because there are infinite local ko threats. If the "attacker" is not willing to settle with a seki, repetition of the same whole-board position will occur, and the game ends with a draw.

Of course, most other cyclic shapes end up with a "draw". (Korean rule describes that triple ko, quadruple ko, round robin ko and eternal life end with a draw.)

There are also the

Asian Games 2013 Rules with their

Attachment 2. Robert Jasiek has written a