This page's sole purpose is to give an example of Positional Superko.
Some readings the ChineseRules imply that this type of ko can occur, but in practice the rules are not applied like this in China. The rules are applied this way in KGS Chinese Rules.
Notice that it doesn't matter whose turn it was or is to move. 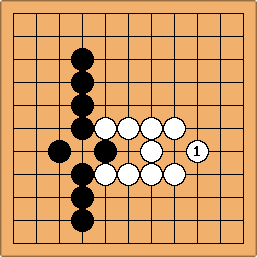 is just showing White's last move. This sets the stage for the position to be repeated (or rather banned from repetition). 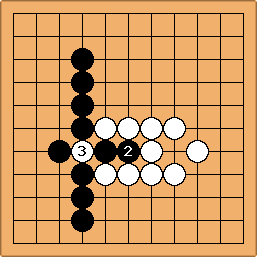 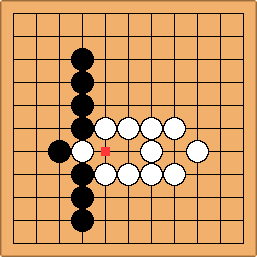 at the marked point, it creates a position identical to the one after

in the first diagram. For positional superko it doesn't matter that Black is making the move instead of White. yoyoma - I reorganized the diagrams to make a easier to see which two positions would be identical if the illegal move was played. The following remarks were originally about the old diagrams:

stone that is missing in the starting position. So the positions are not the same.

Herman: The position that is being repeated is the one after