A Valid Reason For Move 136 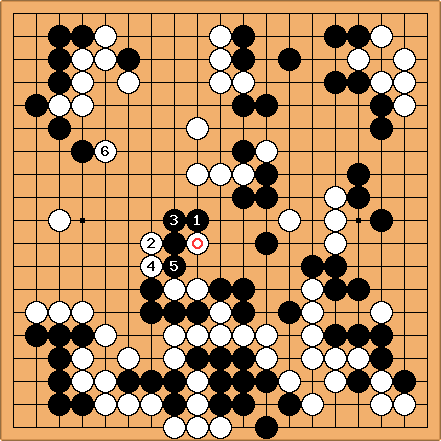 After reading Dave's comments on CanWhiteWinAt136, I felt I had to justify my reasons for playing the marked move. Comments are welcome.

Although I've not done an analysis like Dave has (something I should learn to do), I have a general feeling that if White lets Black play all his large sente endgame moves, then White will not win. White needs to start exploiting some of Black's weaknesses before it is too late. This process should preferably gain White some territory in the places where she can expect some, i.e. on the left side or the top left.

I agree with Dave's comments, (

being a vital point), and considered that one of the natural ways to play a sequence which leads to the white expansion onn the upper and left side is by trying to use the two captured white stones to build some strength; which then serves to play a move such as (for example)

The sequence I had in mind was something like the one shown. The marked white stone (136) threatens black four stones if the two white stones are revived, so Black is forced to answer. The sequence to

seems logical to me. I think I would probably play one place below

, but with hindsight looking at Dave's example, I cannot see why his sequence shouldn't still be valid.

Looking back, I am not sure whether it is such a good idea, nor whether Black would respond as shown...