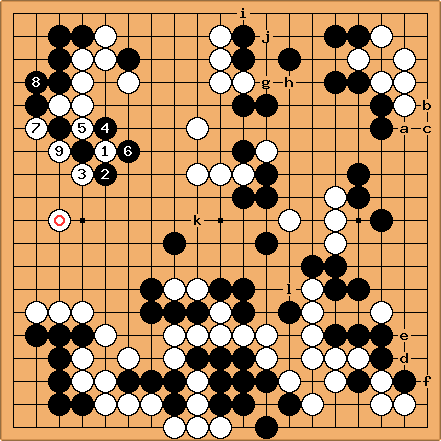 The key point for assessing the position seems to be 1. If White plays here can she win?

If instead Black has the chance to jump to 6 first, has White definitely lost? The second key point is the ability to cut at 3 if Black answers 1 with 2. This is based on Black's bad shape in this area where the cut at 7 threatens to capture the corner plus the fact that the marked white stone is close enough to support White 3. Note that if Black connects at 9 after White 5 and White stands at 6, the cutting stone at 3 can not be caught in a ladder because the marked white stone is a ladder block.

It is very difficult to say what is the best choice for Black here but it looks difficult to prevent White picking up many points if she plays first.

On the other parts of the board, Black a threatens to kill the corner but it is gote after White answers at b. It is worth about 10 points though so Black will choose it, leaving the other play on the right side to White at d. In between White will be able to play g and the rest of the sequence shown, limiting the upper side black territory to just a few points.

Since White will probably get to play both k and l along the way, Black's big center/right side territory looks like it is worth about 65 points. Compared to this, White's upper right and lower side combine for about 50 points. Black's upper left and lower left corners are worth 15 points together at most (assuming White 7 and Black 8 as shown). Then the issue becomes whether White can outscore Black by 25 points at the top and along the left side. With komi this would make the game even.

If Black gives way and answers White 1 with 3, then when White pushes with 2 the upper side alone looks to be worth at least 25 points so Black would need to outscore White on the left in sente (!) in order to get back to the right side in time to play a.

Where have I gone wrong? One open issue is how many points is Black's big territory really? I am neither patient nor skilled enough to count these odd-shaped territories with various large yose plays still lying around the edges. So what is the real score?