Kubomatsu Katsukiyo (久保松勝喜代, 1 January 189415 December 1941) was a Japanese professional 7-dan, who was posthumously awarded professional 9-dan status by the Nihon Kiin and Kansai Kiin 67-years after his death.[1] His disdain for opening convention (which earned him the nickname The Great Amateur) led to many innovations in the shin-fuseki period, including his two-year directed study into tengen.[1][2] In the Kansai area he discovered and nurtured the talent of a number of great players, such as Kitani Minoru, Hashimoto Utaro and Maeda Nobuaki, thereby significantly influencing the history of go in the 20th century. He was an 8-dan renju player (five-in-a-row) and inventor of the ninuki renju variant.

Also, there is the matter of the late, great master of the Osaka area, Kubomatsu Katsukiyo. Master Kubomatsu's flair was for creating immense stretches of territory in the center. If one has the opportunity to play out a game of this master of old, it is recommended that one do so.

Kubomatsu was a good writer and authored several books, some of which are available at the Japanese National Diet Library: 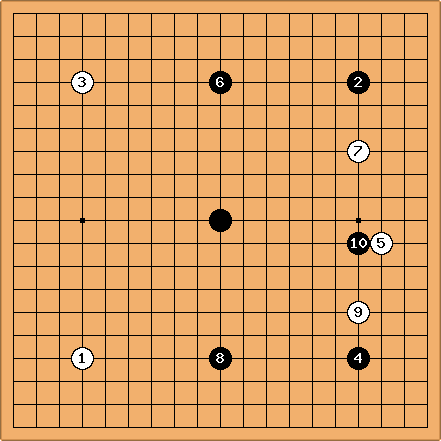