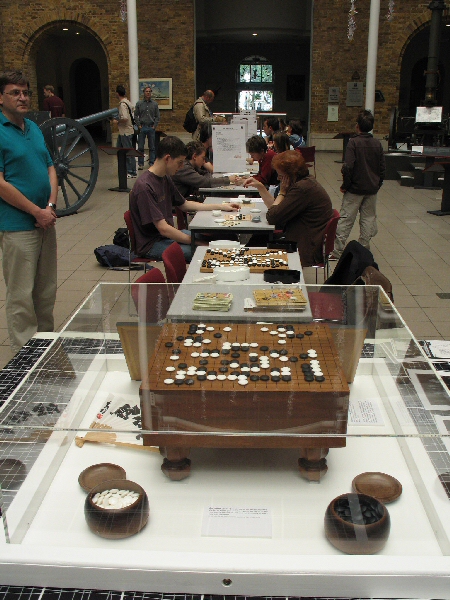 The Atom Bomb Game event at the Imperial War Museum in London, for the 60th Anniversary in 2005. Under the glass is the position of the board at the time the bomb was dropped. The 106 moves from the first two days had just been replayed on the board at the time. The board here belongs to T. Mark Hall. Just visible on the other side is Mark's diploma signed by Iwamoto Kaoru, a survivor of the Atom Bomb game.

The Atomic Bomb Game was a game played 4-6 August 1945 as the second game of the third title series for the Honinbo title, which was held at that time by Hashimoto Utaro. The challenger was Iwamoto Kaoru.

The venue for game 1 (23 to 25 July 1945) was the house of Fujii Junichi, Nakajima-Honcho, Hiroshima City. But game 2 was moved to the Chugoku Sekitan (a coal company, president: Tsuwaki Kan'ichi) employees' dormitory in Yoshimi-en, Itsukaichi-cho, Saeki-gun (Yoshimi-en, Saeki-ku, Hiroshima City today). Go had continued all through the war years in Japan, in reduced form.

The story of the game has been told often. The game recorder was Miwa Yoshiro, and the official observer/referee Segoe Kensaku, whose birthplace was Hiroshima. The second game was played on the outskirts of the city because propaganda leaflets had been dropped, concerning a new powerful bomb (it seems the move was at police insistence). The location was about 10 kilometres from the eventual centre of the explosion.

The blast from the atomic bomb "Little Boy" above Hiroshima interrupted the game in its third day. It came at 8.15 am and at a point where the players had replayed the position - but had not yet started the game again. There were injuries to some of those there caused by flying glass, and damage to the building. Hashimoto was blown off his feet. The game wasn't resumed until after lunch. The game was then played to a conclusion, Hashimoto winning by five points with White (there was no komi). This tied the match 1-1.

People at Nihon Ki-in in Tokyo thought all had been killed by the explosion, before Miwa came back to report the story.

An early Magic of Go column by Richard Bozulich provides more details on this event. The game itself may be viewed 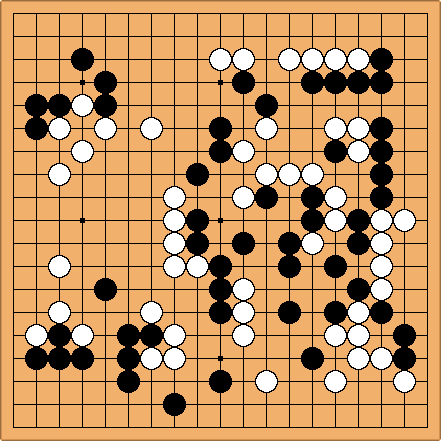 Dieter: Only when the first groups of badly wounded people were arriving in these outskirts, they realized something very bad had happened.

Shouichi?: Count on a Go to be played at a time like that!

aokun: Wasn't this experience part of the inspiration for Iwamoto's later campaign to spread Go around the world and use it to bring nations together?

benjamints?: It is probably not true that leaflets were dropped on Hiroshima. The wikipedia page says nothing about leaflets, and I foud this: "* In yet another label, the Smithsonian asserts as fact that 'Special leaflets were then dropped on Japanese cities three days before a bombing raid to warn civilians to evacuate.' The very next sentence refers to the bombing of Hiroshima on August 6, 1945, implying that the civilian inhabitants of Hiroshima were given a warning. In fact, no evidence has ever been uncovered that leaflets warning of atomic attack were dropped on Hiroshima. Indeed, the decision of the Interim Committee was 'that we could not give the Japanese any warning.'"

Brian: And yet the city had been evacuated. I've been there. The exibits in the museum there clearly said that the city had been ordered evacuated. Some disobeyed, some were in town for the day to make fire breaks. The museum also documented the military role of the city. Take a walk around the castle grounds some time. There are markers where the army (I think it was 5th) headquarters was.

In order for this to not devolve into a discussion of revisionist history maybe the entry should be changed to say the city was ordered evacuated for no apparent reason.

John F. (As author of "Go in Wartime Japan") Well, that would be highly revisionist as it is untrue. There was a forced evacuation of the city centre so that it could be cleared as a firebreak against conventional bombing. Schoolchildren were employed to help with the demolition work, which meant that on the day of the atom bomb the centre was fairly well occupied. One of Segoe's sons was among those on firebreak work that day and he shortly died at home after struggling back to the suburbs with horrific injuries. Forget not too that fighters were strafing the city. One reason the atom bomb game was played in the suburbs is that an earlier game in the centre was hit by gunfire on the roof when 70 to 80 Grumman F6F Hellcat warplanes came over. The tiles on the roof of the game venue were split by machine gun fire but the owner of the house (and sponsor) had refused to go to the air-raid shelter and so the players felt unable to quit the game either.

David B: Having read The Making of the Atomic Bomb (Richard Rhodes) it seems incredibly unlikely that there would have been leaflets regarding the Bomb specifically. The secrecy around that project was a total blackout right up to the day it was dropped. Also, Hiroshima was one of a number of possible targets. Of course that doesn't contradict anything John F. said regarding conventional bombing (and Hiroshima was one of the few sizable Japanese cities not already completely ravaged by conventional bombing; a major reason it was chosen for the nuclear bomb).