The term focal point is often used for a point where opposing moyos meet, when it is the largest point on the board. This terminology is sometimes criticised as inappropriate.[1]

Therefore these points are big because they are double-purpose plays. They are often played in the opening as secondary big points, and are frequently the solution to whole-board problems with quiet positions.

For the difference between the terms focal point and tennozan, see the discussion below

See Strong Groups for another example and discussion. 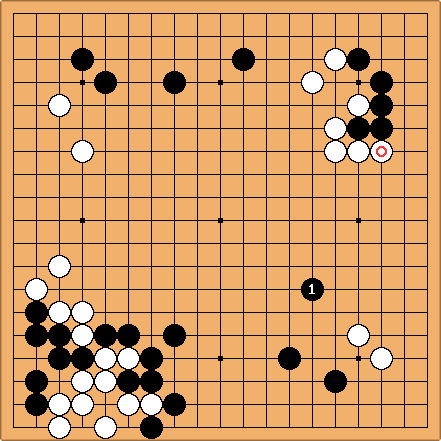 Go Seigen as Black played at

in reply to the marked white stone blocking off the side. This is considered both excellent timing, and a clear-sighted focal play (Black has no need to invade on the right).

Quite a move for a thirteen-year-old!

Appropriateness of the term Focal point

[1] Comment: That seems strange to me. There is nothing focal about such points. They are not at any focus, but at the frontier between moyos. I would call them frontier points or boundary points.
-- Bill

Charles Actually, as I now realise, such parts of the board should have many sector lines converging on them; in that sense they are focal or nodal.

Bill: (Much later.) I have found a term I like better, contact point (of two moyo). And I do not think that such points have sector lines converging on them. The example certainly does not.

Bruce Wilcox I prefer the term "pivot point" as they are a fulcrum, shifting the balance of growth and withering of two moyos.

Patrick Traill (2019-03-12): Perhaps the idea is that they are where conflict is focussed? Chambers Dictionary gives the point or region of greatest activity or interest for focus, and this seems to be closest to the Latin meaning of hearth. (This sense is lacking in

Wiktionary.) Surprisingly an older, historically ordered edition of Chambers does not give this as the first sense and my OED is too deeply buried for now.

Patrick Traill (2020-08-11): What is the difference between the terms focal point and tennozan?

If this comes to a conclusion, it should be cleaned up and introduced into the article(s) as appropriate

Bill: I may be corrected, but I believe that tennozan is based on the site of a famous battle, and indicates a strategically important point, like the high ground in a battle. It is a more general term than focal point.

Patrick Traill (2020-08-13): Thanks, Bill. It may be more general, but on the other hand, the article Tennozan also tells us that to be tennozan a move has to be able to decide the direction of the game. It would help one understand the distinction if somebody could provide examples of three points/moves which are one, the other and both, with explanations why! I also imagine that focal point is of Western origin.