No To Large Moyo

Path: <= All about influence =>
Keywords: Strategy

Go is a very frustrating game. You're always afraid of something. I used to spend a lot of time in fear of an invasion. Will I be able to kill it? Will I be able to defend my "territory" if the opponent decides to invade?

Reading Kageyama's Lessons In The Fundamentals Of Go really helped. As you remember Kageyama advises one to refuse to consider any loose formation as your territory until it really becomes a territory. This advice relieved the pressure a little bit. If it is not your territory you don't fear losing it, but you can acquire it.

Then once in a club we analyzed an amateur game. A good European 4 dan led the discussion. 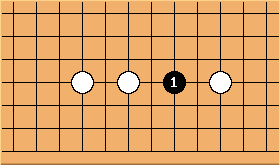 When you are quite weak your first reaction is panic. I am being robbed of my territory! 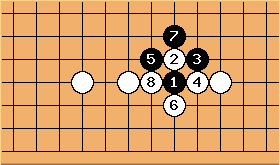 The 4 dan did not like it. Of course, he saw a whole board before him (in some cases this variation is the best thing). 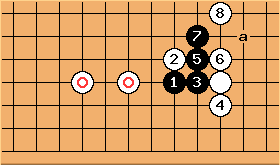 In the above variation, Black might have to win a ladder, and has not significantly weakened the two marked white stones in my opinion. -kungfu

zinger: I think that

in this diagram is very bad. It should be at

is ideal for Black.

when in a position to attack. But

is rarely going to be on the correct point: think about a instead.

zinger: Perhaps, but if that is your plan, then

(as below) looks better.

Charles Yes, sometimes. Taking territory while attacking is proverbial. We tend to think of it as 'making a framework with attacking moves'. But it is also good to take territory, i.e. play actually-enclosing moves. (I think this is an example of a basic instructional point that is rarely written down.) In theory, depending on the right-hand direction, it might on occasion be better to play moves that give a smaller framework that is then easier to consolidate (the right-sizing or we can't all be Takemiya approach).

Bill: We have to remember that

is dubious. That is particularly so in the case Charles envisions. So we are comparing

, with no mistake by Black, with a sequence that starts with a Black mistake. Besides, what the rest of the board is like is vague. 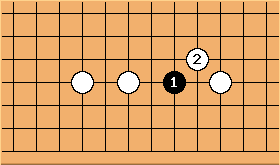 That was an introduction. Now, about the controversial statement. This is a way I invented to calm down my fears of invasion. 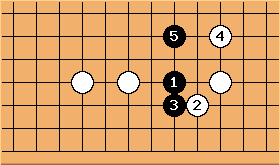 (In the above example by kungfu, Black cannot extend in sente along the bottom as in a normal san san with White on the bottom left. Comments?)

lynx The exchange of 2 for 3 seems bad in my opinion. B is much more solid now than before and can easily make an eye on the ground, maybe even while threatening to counter attack the group to its immediate right.

Bill: I agree that

is bad. I have added 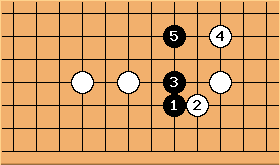 Bill: A little tewari. If Black had invaded with

, would White respond with

If the opponent successfully invades then you will lose some territory. But an attack of the stones that invaded will help you to turn some loose formation into your territory too.

So, huge moyos give large territories.

Comment by Kungfu: From the book "The Power of the Star Point" by Takagawa Kaku, I was given the impression that the threat of making a moyo is all that is needed. When the opponent invades, territory is made (see my example where white extends along the right above). If he reduces, territory is made underneath. In either case, the influence is made to gain extra territory by assuming a joseki mindset but abusing your extra stones/influence in the area.

Examples from a pro game against the statement 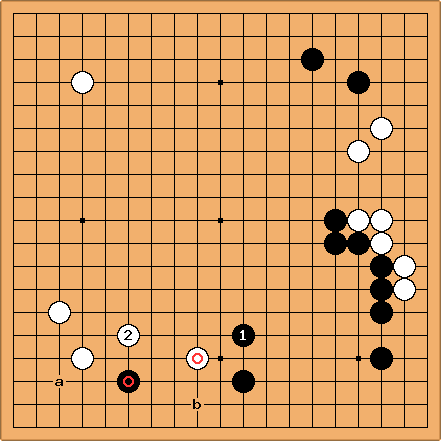 After White's marked move Yi Se-tol played 1 forming a large moyo. Note, that it is not a huge moyo. If the opponent invades the lower right corner, Black has to kill to win the game. White played 2, which I think was a natural move for Black.

Futher in the game White invaded into lower right corner and lived after a long ko fight, forcing resignation.

Joan Pons i Semelis 3d : This kind of position arises quite often in the mini-chinese fuseki, and is not always true that the invasion on the lower right corner stakes the game in a life and death problem. I'll dig to find some examples of this. Also Takemiya Masaki 9 dan was (is ?) very good at letting the opponent life inside his moyos and win nevertheless. But he made "huge" moyos.

Comment on the above by Kungfu: Well, if you make huge moyos, again, let them eat their cake-but use your influence to gain territory and let them live small. Moyo by definition is NOT settled territory! If it is not settled, it is only potential. When you count your moyo, think about how much it is worth after it's been invaded. If it's not enough then you are behind.

Discussion and example of this on Ten Kyu Side Invasion (albeit not at pro level :-)

looks odd to me, but after thinking for a while, I noticed that Black can treat the

stone lightly, and take a and b as miai.

zinger: Agree. Also, I am inclined to wonder why