Three-stone free placement handicap for Black versus 35.5 Komi for White

The game below resulted from the discussions about teaching game 53 where Black is receiving a large reverse komi in addition to two handicap stones. Enjoy!

Dave: ...I don't really know what is the best way to "plan" playing with or against a 50 point komi. Granted in this case it is to compensate for a significant difference in strength but it is still interesting to consider how White (and Black) should approach the problem. It would be interesting to play a game against an opponent of equal strength with for example a 35(?) point komi in exchange for 3 handicap stones.

Dave: 35.5 seems fine for the first try. More generally, what is the procedure to bid between two players to decide komi? I remember reading a discussion of it on rec.games.go but can't remember how it should work.

Bill: There are a few schemes. I like sealed bids. High bid wins and takes Black. If the bids are the same, use nigiri or flip a coin. Komi is the average of the two bids, rounded up to the nearest 1/2. If the bids are different, each player gets a subjective advantage. :-)
One scheme I have never heard of, but should work pretty well is for one player to set the komi and the other player then to choose whether to play Black or White.

SAS: This last system is (or at least was) used in Japan's Strongest Amateur tournament. See 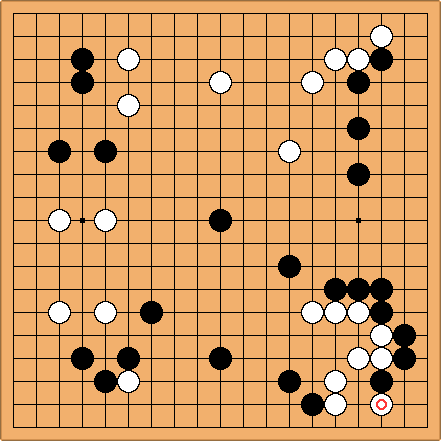 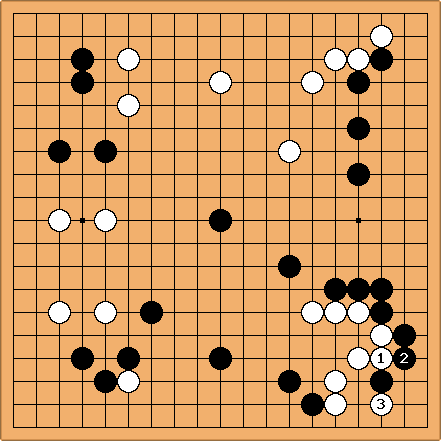 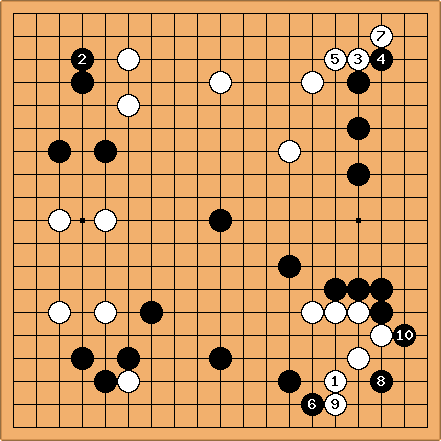 Dave: White 31: I think that there is enough aji left on the lower side to justify this as a dual-purpose move. If White can't effectively reduce the bottom after this, then it is probably too small at this point.

Dave: White 33: The last tidying up before the fighting begins?

Bill: Black 36: A kikashi before dying. ;-)
Much later comment: Again, I was seduced by a "double sente". Allowing W 37 is OK in that corner, but makes White's upper moyo too secure.

Dave: White 37: Win or lose, answering 36 seems unbearable. But at the same time, I can't actually tell whether 36 is an effective kikashi or not if I do answer. The bottom is too complicated and I can't read out what would follow. Therefore I follow the age-old amateur proverb, "When in doubt, tenuki!" :-)

Dave: White 39: We will just have to see where this takes us! Was the analysis for 37 Katteyomi? 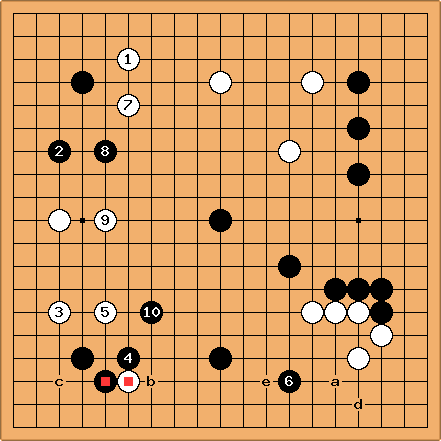 Bill: Black 26: Still flowing.
Much later comment: Better at 29, I think. I thought that W e would be sente, and B 26 close to it. But now I think that B 29 has a better relation to the rest of my stones.

JamesA: Permit the intrusion of a much lower-ranked player but isn't Black 30 a bad move? It doesn't really attack White's left side group and doesn't secure territory. Also, Black is very strong on the bottom side. Isn't the top left more urgent? (or the bottom right bigger?)

Dave I don't know whether Black 30 is a bad move or not. However, I do not think that you can say that the bottom side is strong at this point. The marked white stone still has a lot of aji. It is well positioned to support an invasion at c. If Black played on the upper side and White managed to play first on the lower, I was considering pulling the stone out at b. Depending on Black's answer, I thought that I could either live/escape with those two stones or effortlessly invade the corner at c. I think that it is fairly urgent for Black to follow up on the bottom side . I hope that JamesA is correct that Black 30 doesn't really attack the left - otherwise I must have wasted a move at White 29 :-)

Bill: "I don't know whether Black 30 is a bad move or not." Gee, thanks for the vote of confidence, Dave. ;-) (Dave: Well I also don't know whether White 29 was a bad move. I seriously considered playing 29 at 30 but settled on 29 in the end. Afterwards we can weigh the merits of this exchange!) (Bill: I like White 29. :-) It solidifies the center, aiming at both top and bottom.)
White 29 made Black 30 fairly urgent, I thought. Before that play I welcomed movement from the marked white stone. I expected to run it out into the center, where I could make use of my tengen stone. In addition, the fight would weaken White's position on the left. White 29 strengthened that position, and White's stones one the right are solid, so that fight did not look to gain me much in exchange for my potential on the bottom and middle. Also, as Dave points out, Black's bottom position is not really strong. Take away the marked stones, and that is obvious. The exchange has strengthened Black a bit, but not too much. ;-)
In addition, Black 30 is on the frontier between moyos, enlarging Black's and reducing White's potential expansion.
Black d may have been better. It would have been better if it were sente, but Black is too thin and White is too thick for that.
Later thoughts: Black a looks like sente. Maybe better to play there first. 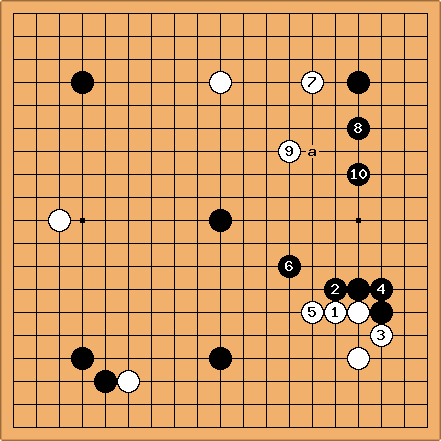 Dave White 11: Heh, it's a handicap game so why not the traditional handicap-game joseki!?

Dave: White 19, I thought a would be too aggressive with the diagonal black wall stretching up to tengen waiting for me. 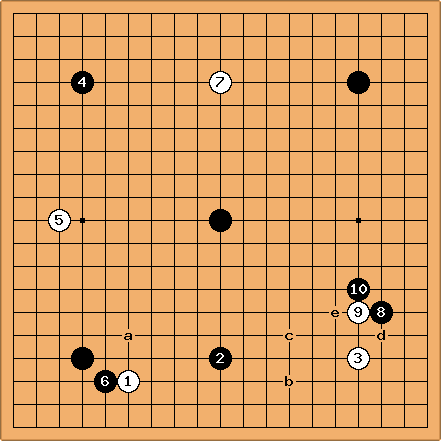 Bill Spight: I've been kibitzing a lot lately. Now you can see how badly I really play. ;-)

Dave, if you start in one open corner, I'll take the hoshi in the opposite corner. Onegai shimasu. <bow>

Dave Onegai shimasu. As you so kindly reminded me, the open corners are miai :-)

Bill: I thought about a, but maybe 2 makes better use of the tengen stone.

Dave: With 2 the lower right seems to become more urgent than the upper left. 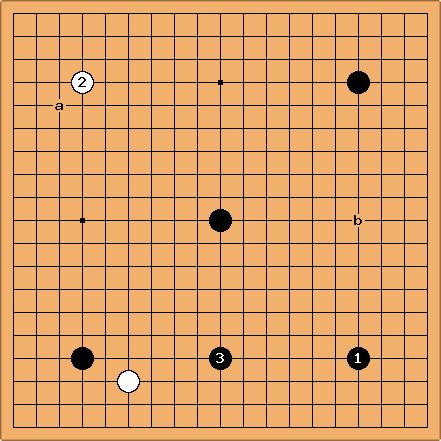 If I play Black 1 instead at 3, if now White plays in the other corner, Black 3 works better than in the game, coordinating with both Black 1 and the tengen stone. If White 2 makes a double kakari, I think I can manage to take sente and play in the other corner.
Who came up with that nonsense about no plan in the opening?

Dave: Hmmm... Yes, this order seems more interesting for Black. I might choose to play a instead of 2 in order to blunt Black's momentum along the left side. But it will still be more difficult to tenuki after 3 than in the game. On the other hand, if I answer 3 then b becomes an awfully good looking point for Black.

Dave White 5: I'll take the midpoint on the left, hoping that it will limit the effect of what you can do to White 1. I also considered the alternative of playing at the top and letting you take the left. This seemed to make it more urgent to continue with the lower left. With the black stone on tengen, I am hoping to avoid any really urgent fight as long as possible (rightly or wrongly :-)

Dave White 7: Following 5 my theory is that I should be able to play tenuki from the lower left, spending some of my komi to break up potential black frameworks.

Dave White 9: Sooner or later Black's handicap starts to exert its force. I first planned to answer 8 with a play at b but was afraid of what would happen if Black in turn answered at c.

I am not sure if White 7 was the right idea or not. Dave 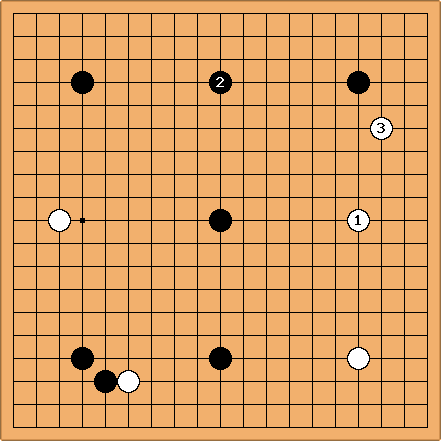 If White takes the right side and Black takes the top then the approach move at 3 expands White's side while limiting Black's top. This way White has superior influence in at least one part of the board. In the game, White's stones are more scattered and it will be a delicate problem to avoid being attacked too strongly.

Bill: Maybe so, but allowing the sanrensei is easy on Black, and it works with the tengen stone. I still think White 7 is good. :-)