A small (270m) strategically-located mountain on the Kyoto/Osaka border, over which a decisive battle was fought in 1582 between Toyotomi Hideyoshi (who won) and Akechi Mitsuhide (the battle of Yamazaki). Thus, commanding position or strategic point. By extension, a battle over such a position or competition to occupy it first.

The is an oblique connection with go: the victor in that battle chased after his vanquished opponent when the latter killed Oda Nobunaga? on the night of the alleged triple ko game with Honinbo Sansa known as the Assassination at Honnoji Temple.

In Shogi there is a proverb that the centre square is the Tennozan; in sport in general it refers to a decisive match.

tennōzan wo nogasu na, literally keep your eye out for the pivotal situation in the game, or don't miss the chance to take the point which expands your moyo while reducing your opponent's.

This commentary at asahi.com says "Black 49 is tennouzan." It's a boshi, attacking the white group and enlarging upper-right moyo. 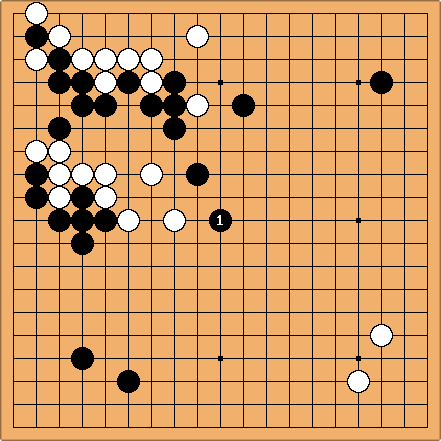 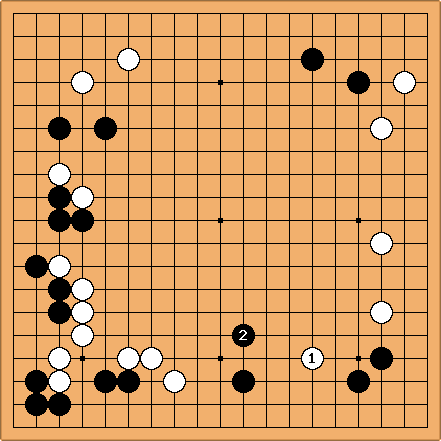 http://www.sankei.co.jp/edit/igo/html/juudan/02judan/2_04.html, which says, "Black should have decisively taken the tennouzan point."

Example 3. Says "For 25 the tennouzan was 27." The move indicated is a knight's move at the boundary of two moyos.

Example 4  In a book by Haruyama Isamu

On www.pietsch-companion.com (now apparently defunct[1]) there was a discussion of a book (by Haruyama Isamu 9-dan) with a chapter called Moyo no tennouzan, focusing on tennouzan as points where moyos come into conflict. 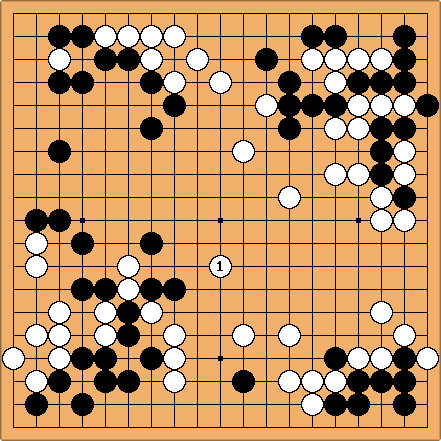 51st Oza title match, game 5. According to the commentary, the large knight's move of

is the tennozan related to the expansion or reduction of both players' moyos, and must not be overlooked. 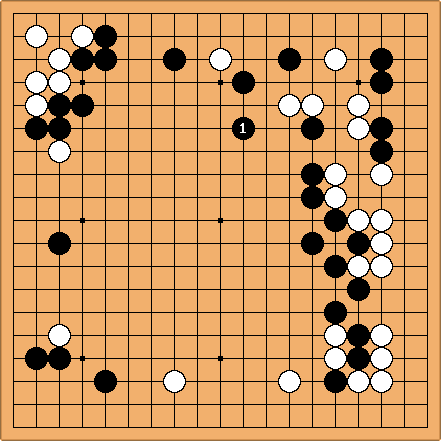 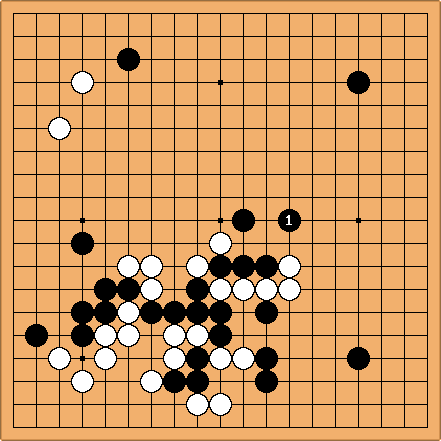 http://hobby.nikkei.co.jp/igo/oza/50_1_3/05.html. The comment is "Black grabs the chance to jump to the Tennozan point and take the lead."

PJT (2020-08-13) I suspect the above link of being defunct, but my Japanese is not up to confirming that and finding a valid version on an archive site. Can anyone help?

Example 8  Another tennozan at tengen 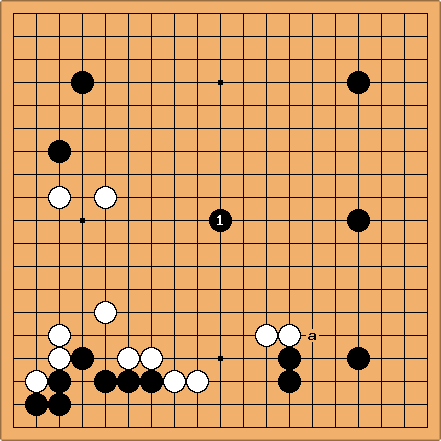 Position from game between Go Seigen, taking three stones, and Honinbo Shusai, Jan. 1-19, 1930. In his commentary in Go Seigen's book Saishin Uchigo Kenkyuu, vol. II, p. 109, Go notes, "a (the move played in the game) should have been at

Concerning this game, Go relates: "This was a three-stone game played against Shusai Meijin under a 2-3-2 handicap. Mistakenly believing it was instead 2-2-3, I placed two stones on the board, only to be gruffly told by Shusai Meijin, 'mittsu (three)'. I recall how I instantly tensed up." Although not a particularly good game for Go, he did end up winning by 11 points. 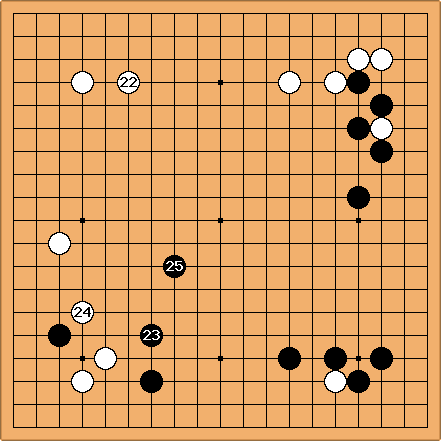 , is played on the point that determines the growth of each player's influence and at the same time the reduction of other player's; this point is absolutely Tennozan. By contrast, Jin Zhixi turns a blind eye to this urgent point. It is truly difficult to understand why he would allow his opponent to play there.

[1] The site www.pietsch-companion.com is now apparently defunct. See the Wayback Machine at