I just played a game on KGS and my opponent decided to give me some "tips" after he defeated me. He told me "don't be too greedy," which of course is good advice that I am already familiar with. However he thought it applied to this position, where I had just played 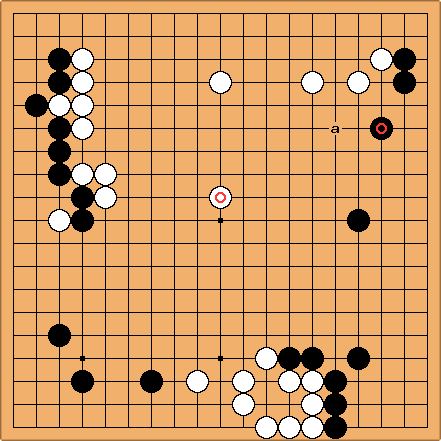 I have no idea if this was the best move, but I do not think it was greedy since I was aware that it did not make secure territory. He said something to the effect that it was a "weakening move" and that it allowed him to "wrap around white's position while making huge territory."

I know I am not very good, and very much appeciate advice from stronger players, but in this case I think my opponent was not much stronger and was incorrect. Can anyone settle this?

Bill: It is a great idea to talk over your games afterwards. But the idea of any amateur less than 3 stones stronger than his opponent giving him tips is ludicrous.
What's to settle? Take a deep breath and move on. :-)

Alex Weldon: I agree with Bill, but we should still attempt to answer the question. I'm not much stronger than Jesse, but my take on the issue; the problem with the marked move is not that it's greedy, but that it's a bit vague, at least to me. My understanding of these situations is that if you're going to expand your moyo, you should try to reduce your opponent's at the same time. That is, play on the border of two moyos. I might consider a in this situation, even though the sake bottle is negative (can someone stronger than me tell us if one line below that would be okay? Horse head is generally a better shape, but the presence of the marked Black stone worries me).

Jesse: I think that Bill has said exactly what I needed to hear, but if you find the position interesting, feel free to take a look at it. Actually, I often do play a move like a, and the sake bottle proverb crosses my mind too. In this case I probably played where I did because I was worried about making use of my wall, but I now think Alex has a good point about playing on the border of two moyos.

jsha: The move in the center is not bad. Obviously it is not a moyo-building move, it is an influence-building move. You now have ladder breakers in many directions, as well as having a central locus for any weak groups to run to. The disadvantage is that at our level, neither you nor I know how best to take advantage of influence. The advantage is that our opponents probable cannot abuse our influence effectively either.

Also, in this case a white move at a is not bad. The sake bottle shape is not weak, the proverb evidently means only that is slow. Often for local shape reasons you want to play a sake bottle.

If anything, I would say that the above situation is not a case of "don't be greedy," but rather "play urgent moves before big moves."

Take all the above advice with 12k grains of salt.

JanRamon: I think white has influence by his wall. The proverb says that it is not optimal to directly try to make territory using a wall by extending from it. Also, when making a moyo, you can't expect to make the whole moyo into territory so you should make it much larger than the amount of territory you need.

Ideally, one should create territory naturally by attacking the opponent's groups (reducing them), without spending moves on "only territory".

The move at a in the previous diagram is indeed a bit slow I think. A moyo may contain small "gaps" as long as the opponent can not intrude very far (giving up one or two stones is often not a problem). 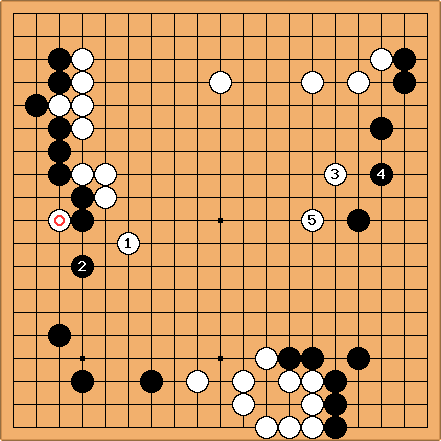 Would this diagram be an improvement? First white makes a keima to extend his wall/moyo. Black answers at 2 to avoid a white invasion in his left side, using the aji in the marked stone. Then, White 3 threatens an invasion in the black right side. When black answers, white can make a wide moyo at 5.

Of course this is not yet optimal as black could now be able to make much territory on the right(bottom). Perhaps a few moves in this area to test blacks intention should be done first?

Dieter (editing simultaneously with Jan): Well, IMHO it IS a moyo-building move. Jesse's opponent's advice sounds like nonsense to me, but the sum of Black's moyos is bigger than the sum of White's. So White should probably break up the Black moyos first. The open space in the lower right is a good place to start.

Jesse: What would be a good way for white to enter the lower right? It makes sense to do so, but I often end up helping my opponent more than myself when I try such things. Also, what proverb is Jan talking about? 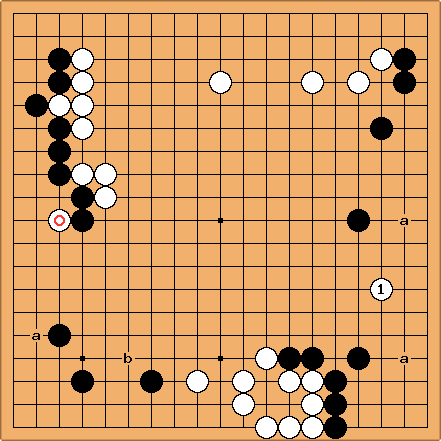 , making miai of the points marked a. Jan is talking about don't use thickness to make territory, that is, directly. Instead, one should use thickness to attack elsewhere, possibly making territory in the process.

Charles Matthews There have been some interesting suggestions here, all of them more helpful in my view than the comment that initially provoked the question. There is some need to talk about aji keshi, here (in addition to the thickness and miai concepts). The aji of

on the left is significant; I'd be interested in combining it with whatever White has after playing a. Also of interest is White at b as kikashi, but that interferes with White at a to some extent and so should be postponed.