Examples (remember not to take these as isolated - there will always be other stones around, or else these shapes are not good to begin with):

Bob Myers: I wonder how this is different from vital point. I know the vital point page claims that that term is used for key life-and-death points, but that's wrong and should be fixed (has been now).

Personally, I like "vital point" for L&D and "shape point" for shape, since the words make it pretty clear what is being discussed. Rather than get into another terminology war, though, I'd suggest putting it all on one page, making "shape point" an alias for "vital point," saying that the terms are often used interchangeably although they really shouldn't be, and creating a discussion page for semantics wars.

Of course, there's also the "pivot" or "focal point" for moyos, to confuse matters further. 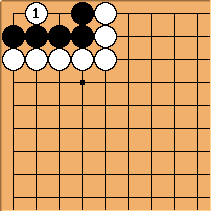 Bob Myers: I agree with Alex's proposal to unify these pages. As for the "Venn diagram" of meanings, I think it's true that vital point is more general than shape point, but not for the reason unkx80 mentions. (When I say means, I'm assuming we are trying to translate the Japanese term kyuusho, rather than assigning some new semantic spectrum to the word, such as by guessing what the word should mean from the Greek etymology of a word a translator chose semi-randomly three decades ago.)

above is not a vital point. It's just a basic nakade point. Vital point can be used in life-and-death contexts, but in the sense that seeing the vital point (shape point) can lead you to the correct solution--not as a trivial killing move.

The reason vital point is more general than shape point is that the former can refer to points which are vital globally with respect to the overall flow of the game, whereas the latter is always local.

unkx80: I see. If this is the case, then there is probably quite a bit of correction to do on the SL pages.

Bill: I see no problem with calling

a vital point. It's just that nakade is the preferred term for these situations.