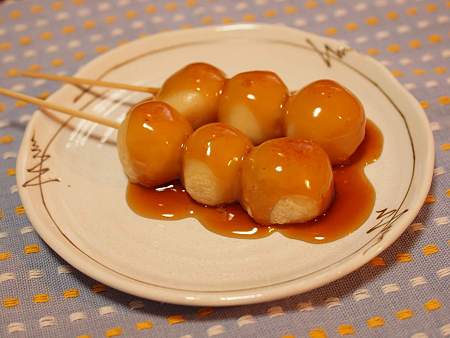 Dango is a Japanese go term, meaning "dumpling shape," that refers to a solid mass of stones without eyes and few libertiesーa very inefficient shape. The corresponding term in Chinese could be translated as "foolish shape."

This clump of four black stones is the smallest dango. Adding more black stones to it only creates a larger dango.

As can be seen from this example, a black four-stone dango may be formed by adding a black stone at the empty intersection of an empty triangle. As an empty triangle is already inefficient to begin with, this makes a dango even more inefficient and makes the problem worse. 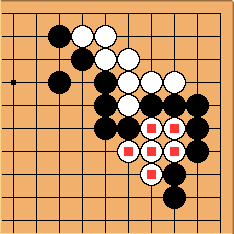 Here is another example from the squeeze tesuji. The

chain is a six-stone dango.

Quacki: Just yesterday, I read my Ranma 1/2 Manga Book (German, Band (volume) 30, I think), which give a translation for dango. It said dango means "balls of fishmeat on a spit" ("Fischbällchen am Spiess"). Does this have anything to do with our dango?

kokiri: Dango are usually desserts, pounded rice balls filled with azuki beans or the like. I've never heard of fish dango, and frankly I'd be a bit suspicious of the translation, but yes the original dango is a foodstuff.

Lacrymology: Filled in the japanese kanji. Dango is any ball (food). Niku dango are meatballs, goma dango are mochi (rice cake) balls covered in sesame seeds (goma). I dont know what is the fish dango that they talk about in Ranma, but dango are almost always on a stick, if eaten by themselves (as in oposition to say in some kind of sauce, or whatever), or maybe on a plate with some miso leaves or something wrapping them. In the go, being black and white stones I can see where at some point a big ugly dango like the one up there appeared and someone thought of a dango which by itself USUALLY refers to mochi dango (ricecake-ball) filled with azuki.. black filling, white surrounding it.. nice image for the dango.

marnen?: I think you mean

John F. I don't think the Japanese refers to "a" dango, but to many: stones being squeezed up together like a lot of dangos. The imagery is rather like a handful of marbles. A load of useless balls, in other words :)