N.B. Seki and dame in grey.

Dieter: I did a little test. It apparently does not recognise ponnuki. Didn't test other captures. It's nice for a start: keep up the work!

LouisMeckes: Stones are in god mode, waiting for the next release :)

LouisMeckes: I added a map called "flux". It is some kind of mix between influence and tension. it seems interesting

knakts: Yes, 9x9 and 13x13 would be great. Also, a possibility to load an existing sfg file and walk back and forth according it. I started to create a game and made one mistake somewhere, now I have to click all the stones from the beginning.

DavidKay?: I played a little with it and I like the influence and concentration maps a lot. However, I think tension and instability can be improved. For instance, two unconditionally living territories butting up against one another have no tension or instability in a real game of go. I feel that instability comes when you have a mix of opposing stones (i.e. little influence for either side) and a low concentration. High concentrations of stones tend to lead to stability. That said, I like this tool. It's fun to play with and it's pretty ^_^.

anonymous: Is the source code available?

Tamsin: The screen-shots remind me of those gorgeous Hubble pics of the Horsehead nebula and other galactic sights. Perfect for cosmic go, ne?

rajmahendra: Is it possible to have it offline and in English version?

erikpan: As a mathematician, I just ask out of interest: does anyone know what model was used to generate these 'regions of influence'? Is it based on the data of many go games, or is it based on fluid dynamic/electrodynamic field equations or some such? I'd be very keen to know, thanks :)

anonymous: My best guess at the implentation is a lot simpler than you suggest, if this is anything like the "influence map" technique common in game AI. Here, it looks like each stone adds some influence to the grid behind it (Imagine B is positive, W is negative) inversely proportional to it's distance from that tile. The values are then summed. For the concentration map, B and W are both positive. I have no idea how tension works, but am interested if anyone has some insight here. "Instability" looks like the difference between tension and concentration. I attempted to contact the author, but unfortunately, it appears the e-mail address is invalid.

I could see this, combined with MoyoGo, a strong Pro Game Database for Fuseki, and something like Kogo's Yoseki Dictionary, with a Touchscreen as big as a real Go Board, where you place your stones in reality on the glass of the touchscreen board and the touchscreen realises it, and via buttons you can activate options like, fuseki patterns, influence and all others. On another small screen, Comments and the SGF tree can be displayed. This embeeded in a nice wooden Table.

This would be a great Go Board for learning purposes.

You play like on a real Go Board, but have the advantages of the computer and its database.

Ah in some years when I graduated College in IT I will maybe start to create something like this.

erikpan: please djmj, please please please make this! I've thought about this kind of thing before and wished someone would make one since I have no skills in this area. If you do develop such a thing, let us all know! :D

This appears to be described in the blog entry at

http://gameschoolgems.blogspot.com/2009/12/influence-maps-i.html - at least, the images are clearly the same, not sure if the algorithms are.

(Sebastian:) This seems to have very little bearing on Go. It probably works for a game where you crush your opponent by sheer superiority of numbers, as in the computer games discussed in the blog. But it has no concept of eye space, which is why it treats the ponnuki just like a dango, as Dieter pointed out. 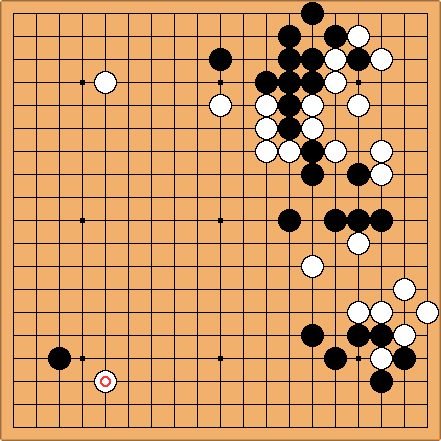 convolution of the stone distribution with some arbitrarily chosen "dissipation" function), and do some very simple math based on that. Currently, the web site doesn't allow me to run the simulation ("La base de données est inaccessible"), but I am sure that it would believe the highest tension in the depicted board situation to be in the upper right corner, not around the lower left, where the actual action was. (This is corroborated by the statement "in circumstances when there is no conflict on the map this will give the greatest assembly of troops as the highest tension which in a way is true because where there are many troops there's a big chance of something happening." - which is certainly not true for Go!

Oliver: Does anyone know why the program is not accessible anymore? I wrote a mail to the developer some time ago without getting an answer. Didn't care much as I used to have a software, which did an influence simulation. Unfortunetly it's not available anymore. Combined with a good database such a thing is really a great tool to study Go. Are there alternatives?

peepo.com hosts the pachi Go engine and provides a variety of visualisation options including influence maps. It's a pity this wiki-page is not in reverse date order ~:"

RobertJasiek: Can influence maps that work similar to light be used for anything else than recognising basic spheres of influence and stone distances? Other than that such influence maps are useless and should be replaced by my influence definition, which assesses n-connection, n-alive and n-territory.

djhbrown: Robert and Dieter are right about the inutility of a simple spread algorithm which creates an influence map that is downright wrong and therefore a hindrance rather than a help.

An influence map would be a very useful visualisation aid, but only if it is based on sound ground. That grounding is the life or death (lod) status of stones, which must first be established by tree search.

In game 5 of the alpha-Lee match, Redmond at one point mentioned a "black shadow" extending into white's moyo. Redmond pointed out that this black shadow only existed because the few black stones creating it were unequivocally alive (in that case, because they already had one eye and could make another).

Redmond demonstrated this by showing variations that were no more than 3 moves deep, so the fovea-circumscribed tree search to establish lod status was small.

Definitely software to paint influence maps is worth working on, provided it takes as its input a board with lod-labelled stones.

I can envisage four colours: black, white, neutral, and grey for areas of aji whose lod status is undecided. Making a map is the easy bit; tree searching is easy too - the only hard bit is to figure out how to circumscribe the fovea.

Repeated passes of the algorithm continue until the cp status of every point is stable from one pass to the next. At this stage, groups are identified as cps connected by transitivity (ie groups include empty points as well as occupied ones).

The boundary of a group is then the set of edges of connected cps.

The eyespace(s) of a group is/are the set(s) of contiguous empty points bounded by the group boundary.

If a group has two eyespaces or a single eyespace large enough to form two eyes, it is alive. If it doesn't, treesearch is necessary to establish its lod status.

This is where a second iterative algorithm comes in. It begins with a narrow fovea (simply the area bounded by the group boundary) and diverges by "widening the lens" by a single point-width and treesearching again within the area of the fovea and carrying on widening and testing by treesearch until either it can find two unequivocal eyes, or the fovea edge bumps against the boundary of a live enemy group, and it cannot be extended into that area. This is a heuristic device, and as such is vulnerable to trick plays by exhaustive tree searchers like Lee Sedol; for my algorithm would never have had the temerity and impudence to attempt to live inside enemy walls in game 4.

And so we come to the influence map: once lod status is determined, the only remaining question is: how far does the shadow of a live group extend? Certainly not as far as a light ray could go - but just how far? My intuitive guess is that a wall could cast a shadow as far as the wall is high, but no more than 8 spaces, since an empty area of 8x4 on the edge or 8x6 in the middle is big enough to live inside (my numbers may not be quite right).

There's another proverb about stay away from thickness, but again, how far away?

Once again, my guess is far enough that you could, if you had to, live in the gap between you and the wall and/or escape sideways towards cps of your own, provided there aren't any enemy cps in the way.

One thing is for sure: for influence mapping, there is no one-liner simplistic answer like physicists and mathematicians like to find. Go is messier than QED :)
Oscar Bear: I think that influence without life and death can be fine if the user of the influence map has the option to themselves mark stones as dead or alive.