LovedInEmerald I've noticed a pattern occuring quite frequently in my games which I found quite interesting. Starting with a full triangle I will quite often play atari which will then lead on to my having dango. I will then find myself with either an empty triangle if I don't fill in the hole or with dango if I do fill in the ko (I don't feel white generally has any reason at all to fill in the ko). If anyone has any other examples of shapes turning bad with (presumably) incorrect play I would be quite interested in seeing them (I find things like this happening more as I play people stronger than me). 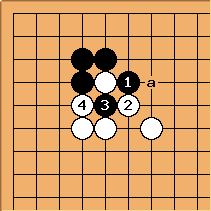 LordOfPi I think Black shouldn't connect the ko after

. An interesting move for Black locally is a to make fourth line territory.

My thoughts behind the page were examples of how some lines of play can damage your shape as I've found the above example creeping into my games on a fairly regular basis (the idea of not connecting the ko would likely have helped me out in some of the cases). That makes more sense, now I've got over the idea that a ko must be filled in immediately. 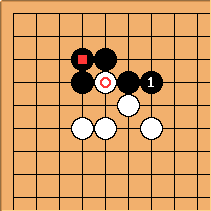 Charles In this case

is better than capturing

You could say that the presence of

means that Black has no great need to take

HolIgor: Adding several abstract thoughts to what Charles said. One of the most valuable things about a good shape is that the stones are placed efficiently, each of them is doing its job. So, if you add more stones in the close vicinity, they would be wasted, the functions of the stones would overlap. This is called overconcentration: too many stones in one place. So, playing too close to a good shape one would always spoil it.

is better than capturing

even in absence of

and capturing still being mi-ai.

Ooh, I've found an example of a full triangle turning into dango from a pro game now but I can't really understand what's happening in the position. Sequence starts with the marked stone ;). 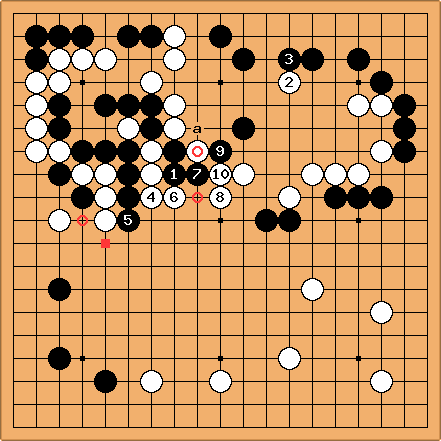 LovedInEmerald I'm not really sure what exactly is going on here but this seems a little more interesting than my previous example as white creates a bad shape (empty triangle) to give his opponent a worse shape (dango). After a play at 'a' and a couple more plays at the marked points then black is forced into bad shape to save stones. Needless to say with this being a pro game then white is not pushing black into bad shape free of charge (unlike my games). I'm only really bringing it up as I've not seen dango much in pro games and I'm having trouble assessing the position.

Charles This is a squeeze going on in the middle of a complex fight. Local assessments won't help much with this sort of pro game position: any sort of bad shape can generally be assumed to be paid for in some other coin.

LovedInEmerald Ahhhhh, now I see what I was trying to illustrate with my first bad diagram (the squeeze technique).

LovedInEmerald I've just found another example which occurs fairly frequently in my games as I'm obsessed with trying to play kikashi.

Unlike the full triangle to dango example I think the mistake is less obvious if indeed Black could be said be making a mistake. Anyway... this is a sequence I've been on the white side of several times and I think it would be fair to say that Black would be be better off not playing the tiger's mouth connection here. Comments please?

Note: Correct play here would be 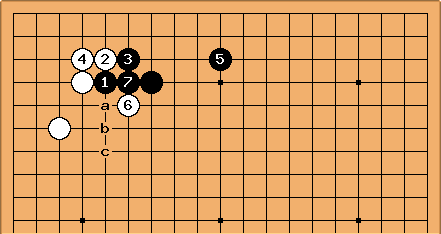 Firstly, what Black is up to here. 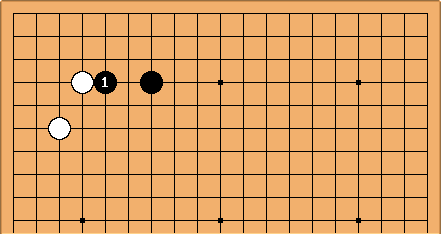 This type of play should be used by Black only to help rapidly some stones that are in serious need of it. It is expected to be a local loss for Black. 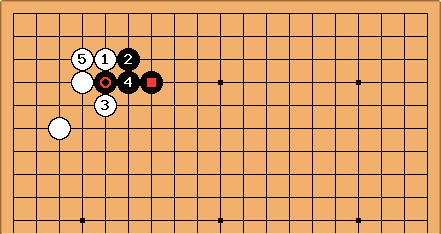 are almost instinctive to take advantage: since

ends up poorly placed, White would only hold back for some serious reason (if White was trying to kill Black, for example). 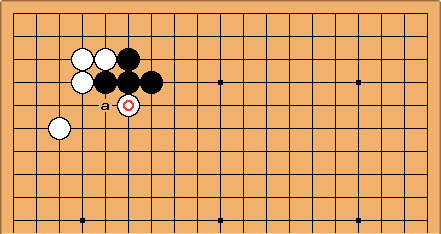 It makes more sense for the

stone here to be moved to a, doesn't it?

LovedInEmerald You know, it actually never crossed my mind to play at a :S. In the games that I have been playing this type of play is fairly common just as a means of "attacking" white's corner. Still, my main hopes with this page were to find bad moves rather than good moves so this is a useful thing to know :). I wasn't sure whether

was an okay play but used the wrong connection or whether

was always doomed to create bad shape. Thanks again!

Andre Engels: I find it strange that you describe

as an 'attack'. Attack in Go is supposed to mean that you try to exploit some weakness of the opponent's shape (especially a lack of eyes). Here, you are leaning against a strong position (at least one stronger than your own), and inviting it to strengthen itself even further. Nothing that looks like an attack.

LovedInEmerald I didn't describe it as an attack... I described it as an "attack" :p. There are people of the same rating as me who play these sorts of moves believing contact plays to be attacking moves. Lots of people actually ;).

Inverted commas/quotation marks are used often in English to place emphasis on a paticular word to show that this is not the word you would use in the same context (there is no grammatical need for them here). I didn't include them on the second occurence of the word as I assumed my meaning was clear at this point. Sorry for the confusion :S.