Eyes are a central concept in Go and more in particular in the theory of Life and death. As is well known, two eyes guarantee the life of a group and one eye can mean a great advantage in a capturing race.

The common understanding of "eye"

In general, what Go players call an eye is an empty space surrounded by stones of one colour, the simplest forms of which are the single point eyes. The function of an eye is that it serves as a (temporarily) irremovable liberty of a group.[1] 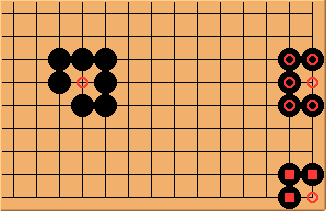 Here are single point eyes in the centre (unmarked), at the side (marked

) and in the corner (marked

However, larger surrounded spaces can also be called eyes. More generally we call these an eyespace.

For a more thorough explanation of single point eyes, we refer to recognizing an eye. Also, beware of a false eye that may look like an eye.

[1] It is clear that "surrounded empty space" is too vague and soft to serve as a formal definition of an eye. On the other hand, "irremovable liberty" is probably not suitable either, because there are such liberties in seki, and these are commonly not viewed as eyes.

The discussions of technical algorithmic definitions on what an eye is and what is not, are meant mainly for mathematicians and computer programmers, for whom absolute precision is needed.

For the aspiring Go player, recognizing an eye is good enough for acquiring the knowledge needed to play.