Dangos can be found by using pattern search in professional game databases. The following examples have been found in the Winter 2007 release of the GoGoD CD.

There are 244 3x3 dangos in the database (out of 50 078 games) including this interesting corner position: 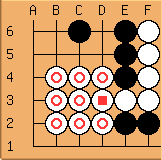 Considering symmetries, a 3x3 dango can be created with the 3 moves described here. We are interested in the percentage of wins in each case.

When the dango is created by playing at

When the dango is created by playing at

No 3x3 dango has been created by playing at

. Considering the winning ratios, it doesn't seem a good idea to create such shapes.

There are 12 3x4 dangos in the database including this efficient living shape:

There are no full 4x4 squares in the database, but it's possible to find 15 stones of the same color in a 4x4 square in this position: 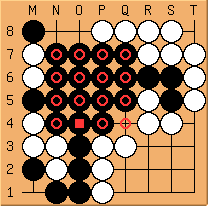 To find bigger dangos, it is necessary to relax the constraints and remove several stones in the 5x5 square. The following example is a 5x5-6 dango (19 stones of the same color in a 5x5 square): 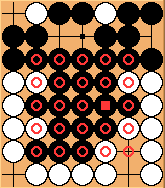 Is it possible to find a better result?