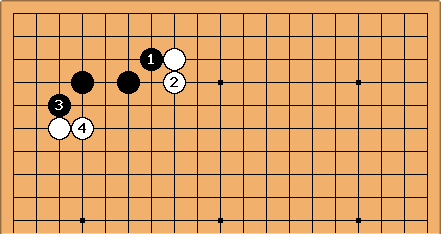 are diagonal contact plays. One such play can be justified if you then attack the opponent's heavy group. 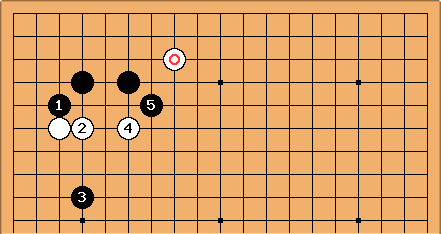 In this case Black is doing well, since

affects both White's group on the left, and 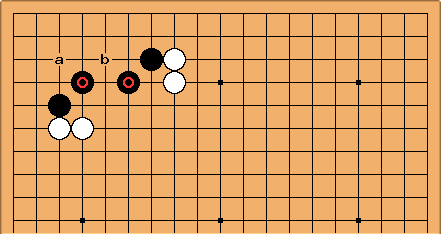 Here, on the other hand, it seems that Black is only interested in immediate territory. Since both a and b are weak points of Black's formation, there isn't much real, secure territory so far. White's stones on the outside have gained greatly in influence, though.

This way of playing by Black contradicts the initial formation's basic nature: stones on the fourth line should be a source of power.

[1] Bildstein: Last night, I was lucky enough to play against a strong Korean player visiting Canberra from the Department of Baduk Studies in Mjung-ji University. I'm ~2 dan Australian, we played with 5 stones handicap, and he did not have much trouble beating me, so I respect his play, and what he said after the game.

Recently, I've been burned by this second approach move (

), and I decided I had to learn how to handle it. I came here, and found that this pincer and diagonal splitting attack were the closest to advice that SL had to offer. In my game against my Korean friend last night, I played this way in response to his first to moves. He was quite happy with

This is how play continued, locally. Later, White played a to get himself out of trouble. 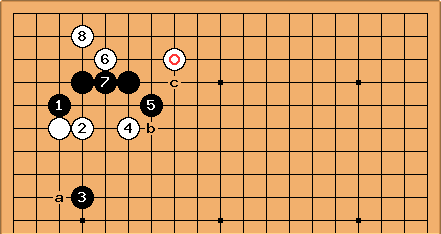 In future, if I play this way I will expect

, and I will aim at Black b to put pressure on White. Yet even this line of play gives White something to attack in

For reference (and from memory), my opponent suggested

at c, and continuing with