This page describes a go term created by Robert Jasiek.

A dead ko is a ko where one side's stones are dead and can be removed by the opponent quite like ordinary dead stones from territory. Usually such removal occurs only after the endgame.

While regular kos can be or become worth fighting during the game, usually dead kos are and remain uninteresting until after the endgame. On average, regular kos occur in almost every game, dead kos in about every third game, double ko deaths (perpetual kos) about once every 300th game and rare kos (such as double ko seki or triple ko) roughly once every 5,000th game. As the second most frequent ko type, understanding dead ko is much more important than understanding the scarce or rare ko types.

When elsewhere a regular ko fight occurs, then White can make ko threats in the double disturbing death formation.

When elsewhere a regular ko fight occurs, then White does not have any ko threat in the shape having or getting dead kos. Dead kos must not be confused with double kos!

A triple ko is "hot" during the game. 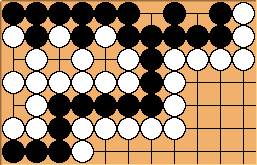 Dead kos must also not be confused with triple kos or greater multiple kos. After the endgame or during scoring, dead kos can be dissolved and the attacker does not need to play like in a triple ko: 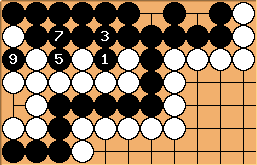 The white moves in between are passes. 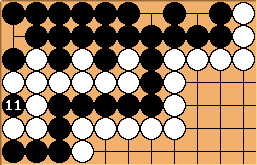 The big white string adjacent to the dead stones is also dead: It can be removed.

This concept is relevant

A dead ko is a ko by shape, not by actual play. (Some rules resolve questions of life and death by actual play in an encore. But in such cases the possibly dead stones are not removed like ordinary dead stones.) 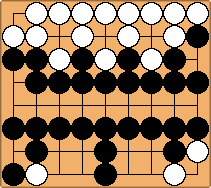 Each of the 6 kos on the board is a dead ko. Black will be able to remove all the white stones from the board.

This is a counter-example because it is not a ko at all! 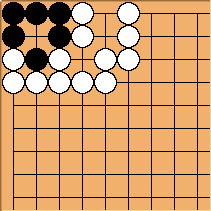 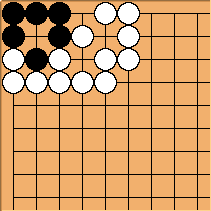 This is a dead ko. (Note that each basic ko consists of two intersections.)

Bill: This is a ko only by shape. Even with play White can capture Black without taking the ko.

RobertJasiek: Like every basic ko, it is also a ko by the principle possibility of repetition after 2 plays. 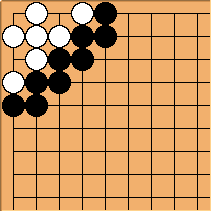 RobertJasiek: For all common restriction rules, this is a position with two examples of dead ko.

A dead ko is a ko for a player so that

Bill: Because it introduces new terms, this definition "raises more questions than it answers", as they say.

RobertJasiek: As long as they are dead kos. As a consequence of ko threats, they might resurrect. Regardless, virtual-force is important in a definition of dead ko also to distinguish it clearly from other ko types. In fighting ko, it is essential. Its consistent usage in all disturbing ko types and in fighting ko allows a nice classification of them. 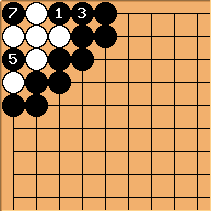 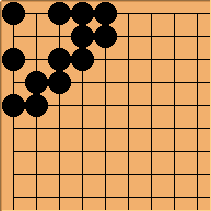 Black can continue to create a two-eye-formation that also covers the two initial kos.

Black can remove White also if one or both of the kos is initially open for Black. Contrarily, White cannot create any white two-eye-formation or white uncapturable string on either ko. The summarizing conclusion is that each of the initial kos is a dead ko. 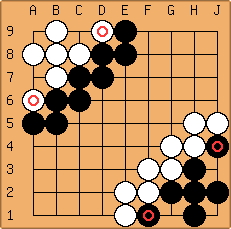 tderz: Above 'dead ko'-definition reads: "A dead ko is a ko where one side's stones are dead and can be removed by the opponent quite like ordinary dead stones from territory. "
Are 'dead ko's a6, d9, f1 and i4 all the same - but not inter-related?
If they are (inter-related), does above definition then suffice? (and encompass all possible cases?)

RobertJasiek: Forget about reading the informal description as if it were a formal definition. - For the purpose of my formal definition, each of the four kos is analysed independently of (possibly not yet) assessed ko types of other kos.